Is Paul McCartney a fake? 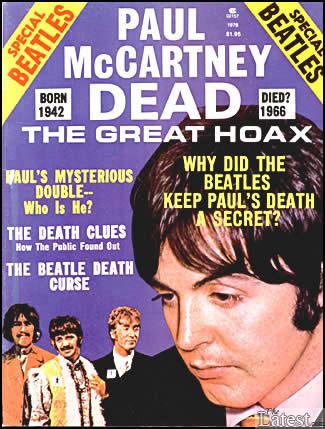 It seems nothing is beyond the scope of conspiracy theorists on the internet like the supposed death more than 40 years ago of music superstar Paul McCartney.

The front man and hugely talented Beatles pop group song-writer currently embroiled in a messy divorce battle, was the subject of a rumour that began circulating in October 1969.

Proponents of the theory, who are nothing to do with his feisty ex Heather Mills McCartney, claim that the pop star, nicknamed Macca, died in a car crash in late 1966. The wacky theory, which is commonly referred to as the  'Paul is dead hoax', suggests that McCartney was replaced by a lookalike before the recording of Sgt. Pepper's Lonely Hearts Club Band album.

The so-called "clues" are given throughout the post-1966 Beatles material in the form of peculiar album covers, possible symbolism in strange lyrics, and back masking (inserting hidden messages into tracks which can only be consciously heard when played backwards). The story started when radio DJ Russ Gibb received a call from a listener who claimed that McCartney had died and the Beatles (namely John Lennon) had sprinkled hints throughout the Beatles' albums for fans to pick up on.

The rumour quickly died down in 1970 after McCartney revealed himself to be alive on the cover of Newsweek magazine. However, some theorists still maintain that Paul is dead and the current Paul McCartney who played with the group Wings is the same look-alike who played with the Beatles after their Revolver album.

US home looted after Craigslist hoax

1 Response to "Is Paul McCartney a fake?"

<p><strong><u>Chris Gaynor</u></strong></p><p>Nothing surprises me in this world - even if it is beyond belief - people are crazy enough to believe Elvis is still alive, so whose to say that Paul McCartney wasn&#39;t abducted by Aliens and sent back as a lookalike. Stranger things have happened!</p><p>Perhaps the real Macca is a &#39;poor&#39; old sod - I wonder what&nbsp; Heather Mills&nbsp; would do if that was the case? That would really test her on whether she was a gold digger or not!</p>