As the UK coalition government’s cuts begin to bite and redundancy notices drop on the mat, Prime Minister David Cameron and his sidekick Nick Clegg's talk of "we are all in this together" looks hollower by the day.

Cameron, his deputy or some government minister, pontificate daily about people standing on their own two feet, and that far too many people have made a life style choice of sucking on the tax payer’s tit.

This government have especially singled out for demonisation the most economically disadvantaged section of the working classes for claiming benefits from the tax pot they are legally entitled to, which despite their criticism of others, is something Cameron and Clegg have not been slow to do for themselves.

When  Deputy Prime Minister Nick Clegg worked as an advisor at the European Union and later as a Member of the European Parliament, he claimed approximately £2.5 million of public money in salaries, allowances and expenses. A sum which makes the average benefit claimants weekly payments look like very small beer. As Deputy Prime Minister he receives £134,565 a year plus his MPs salary of £65,737 a total of £200,302 plus expenses, along with the use of a country residence Chevening House, which he will share with Foreign Secretary William Hague. 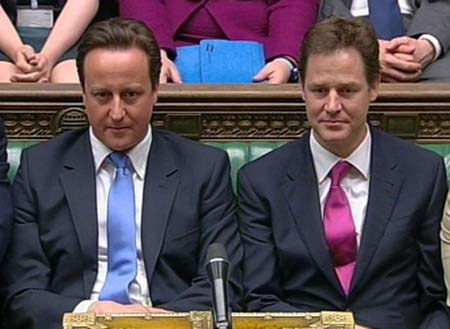 There is also a London grace and favour flat in Admiralty House just down the road from his Whitehall office. No hesitancy from Nick Clegg when it comes to pushing his own snout in the tax payers trough, he has a long history of revelling in it, like a pig in shit.

David Cameron and his clan are no slouches when it comes to enriching themselves from the tax pot having been at it for centuries, these days they have taken full advantage of countless agricultural and  heritage grants. His wife's father 'sir' Reginald Sheffield, who was described in a national newspaper as a bully multimillionaire landlord, is regarded locally as a master at fleecing the public purse and it is said manages the upkeep of his 300 acre country estate by legally manipulating the public purse.

With these greedy class prejudiced upper class trash at the coalitions helm, it is hardly surprising further down the food chain government ministers are keen to emulate their master’s behaviour. Below is a petition from the web site 38 Degrees, which points out one can hardly expect Tory Chancellor of the Exchequer George Osborne to come down hard on tax cheats as he has a long history of manipulating his tax bill to his own advantage. A recent Channel 4 documentary pointed out that he hired dodgy accountants to successfully help him find a wheeze to avoid paying £1.6 million in tax.

Members of the campaigning website 38 Degrees voted to protest against tax dodging. The website states: “We don't think it's fair for the UK's richest to be dodging their fair share of tax whilst the rest of us face cuts and tax rises. We've sent our MPs thousands of e-mails and hundreds of 38 Degrees members have helped design adverts for our national ad campaign against tax cheats. Now, let's turn up the heat on our tax dodging chancellor.”

*Mick Hall has his own blog Organised Rage.