This week’s news has been understandably dominated by coverage of the awful events emerging from Gaza. But back in the UK, another story reared its head receiving less exposure than it should have got.

I’ve previously written about how the mis-selling of Payment Protection Insurance (PPI) may well be the biggest financial crime in history: an enormous £23bn-and-counting worth of payouts to customers who were mis-sold the insurance, an amount which was originally predicted to be just £1bn and at its current total could have paid for the 2012 Olympics twice over. With PPI now the most complained-about financial product of all time, the Office for National Statistics have estimated that most of Britain’s economic recovery has been entirely due to people spending their average payout of £2750, rather than any government policy or stimulus.

The enormity of the fraud around PPI isn’t just to do with how much money was taken off customers - it’s the entire nature of it. Most other financial scandals since the crash of 2008 (and you can take your pick from traders losing billions with bad bets, breaching sanctions, dealing with Mexican drug cartels, etc etc) could be just about passed off as bad individuals going rogue. But as John Lanchester - a financial writer who’s done more than most to track these cases - wrote last year, PPI “happened not inside rogue units of these huge global institutions but at the centre of their retail operations. This was an industry-wide, systematic cheating of the banks’ own customers.”

And like some financial version of the Fukushima reactor, it keeps leaking out toxic material: this week Lloyds Banking Group saw profits for the first six months of 2014 fall by 50 percent year-on-year thanks to what they euphemistically termed "legacy issues". In plain English, that was largely made up of £600m set aside for PPI repayments, meaning that Lloyds alone have now paid back a staggering £10.4bn for their hand in mis-selling. 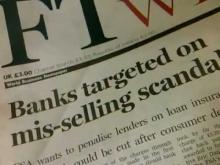 But in addition, and potentially more interesting, was another fine slapped on the bank: £226m from regulators in the UK and US for manipulating the LIBOR rate (the rate at which banks promise to lend money to each other). Other banks have previously been fined for LIBOR-rigging, but this settlement included an £8m fine for a previously unknown scheme designed to minimise how much money Lloyds paid to The Bank of England in return for access to its Special Liquidity Scheme (SLS - a fund set up to keep banks running in the immediate aftermath of the financial crash in 2008).

The sheer brass neck of this is what’s so astonishing. At a time when - in the words even of Lloyds chairman Lord Blackwell - “the bank was on a lifeline of public support”, Lloyds (which is still 24 percent-owned by the taxpayer) gratefully took with one hand from the Bank of England, while helping themselves to a little bit extra with the other one. Bank of England governor Mark Carney gave an angry summing up of Lloyds’ behaviour: "Such manipulation is highly reprehensible, clearly unlawful and may amount to criminal conduct on the part of the individuals involved." Owen Watkins, barrister in the corporate team at Lewis Silkin was even more blunt: "This is effectively a fraud on the taxpayer, as SLS was a taxpayer-backed measure."

Lloyds’ chief executive has made the right apologetic noises - “I would like to say once again this is totally unacceptable and we condemn this without reservation” - and seven former or current employees have been fined for their misconduct. But despite this, and the almost certain promise of more bad news to emerge, it seems like business as usual for the banks: none of the traders or managers are identified by name in the reports; even after the fines, the bank still made £863m in pre-tax profits; and is planning to restart paying dividends to shareholders.

In other words, you can run a bank down to the point where it has to be kept alive by government intervention, you can then scam the Bank of England while they’re keeping you going and you can systematically rip off a vast number of your own customers - but you won’t really be punished. Iceland showed that there is a different way of doing things after its own financial crash, when four bosses of the Kaupthing bank were sentenced to up to five years in prison. With such penalties off the table in this country, it’s only a matter of time before the next scandal emerges.