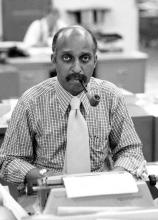 C Gerald Fraser, who has died aged 90, was a rare breed – you could call him a citizen journalist inside the mainstream press. Openly admired by publisher Arthur Ochs "Punch" Sulzberger Senior, Fraser reported for the leading New York Times on events that shaped America's racial affairs 1967-1991.

Honoured in the 2016 Hall of Fame of the National Association of Black Journalists, he was an “inspirational mentor for generations of reporters". “While doing it with heart”, added Charlayne Hunter-Gault, his former colleague.

Notably, Fraser asked of himself and others: Who are you and what are you in the newsroom for? “Inclusive and accurate reporting of African Americans in mainstream media” was essential for him, said the NABJ.

What makes Fraser an exceptional newspaper reporter? The answer has many strands. "Reporting Civil Rights," a 2003 anthology, records his economics and journalism degrees from the University of Wisconsin and the New School University, New York. Veteran Times man, Earl Caldwell, featured him in a civil rights series for the Maynard Institute for Journalism Education.

Moreover, in the riotous Sixties, Fraser’s reports matched the conflict stories and gained the respect of readers. These include: Martin Luther King Jr’s civil rights March on Washington for jobs and freedom August 1963; the southland voter registration campaigns; and Stokely Carmichael, Trinidad-American  who raised the popular demand for “Black Power.”

Fraser was an internationalist as well. He was born in Boston to a Guyanese father, Charles Senior and Jamaican mother, Bernice May Love, in a strong West Indian community. The immigrants’ St Cyprian Episcopal church empowered him. At home, the Black Boston weeklies were his lessons in equal rights and colonial freedom.

From 1991, Fraser edited the campaigning Earth Times and mentored young activists on United Nations Habitat human settlement, climate change and women’s rights.  His colleague Pranay Gupte recalls “He taught them…that every question relating to social justice could and should be pursued with determination. He taught us that in journalism fear had no place. Fear had to be overcome”.

Fearless, well into the 21st century, Fraser’s message is relevant today as the press fails to cope with media racism and reporting hate crimes, rising across the western world. In his private notebook, A Black man’s thoughts on Barack Obama’s election, he wrote: “We want transparency; we want to be able to hold elected and unelected movers and shakers responsible. We kept hope alive, now we want change.”

Fraser lived in Manhattan and died at Calvary Hospital, December 8. He and his wife Geraldine McCarthy, who died in 1981, had two children, who survive him: Charles Gerald III and Jetta Christine. His loving partner M. Phyllis Cunningham, activist, nurse educator, their daughter, Maurella Cunningham-Fraser; three grandchildren; and a brother, Walter, also survive him.

* Thomas L Blair is an award-winning journalist, author and sociologist. He writes features for The-Latest.com and is well-known for his weblog https.chronicleworld.wordpress.com and Editions Blair website at the British Library portal http://tinyurl.com/zksl3ay