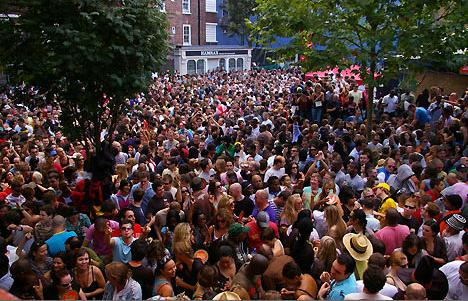 Now is the time for “We t’ing!” No, I don’t mean the “rum and rhythm” festivities every August in Notting Hill, in an underserved iconic Black district in London. I’m talking about refuting a popular stereotype:  that Black people in Britain have “No-culture, no-history and hence no-worth, no power, no-chance”

In an era of recession, hard-hit Black leaders will have to campaign against the arts budget cuts that cripple their ability to fight cultural racism and keep Black community cultures alive and local.

First, threatened leaders of community and educational centres must protest the Arts Council average cuts of £2000 that threaten carnival enterprises. Among them are the Notting Hill Mas Bands Association, the UK Centre for Carnival and the Elimu Carnival Club. Under threat, too, are Professor Stuart Hall’s Institute of International Visual Arts and the Yaa Asantewaa Arts and Community Centre.

Of course, protest alone is not enough to combat budget cuts and stereotypes about Black history and cultures. Black educators must link Carnival to mainstream national curriculum subjects. This means enriching teaching and coursework with the Black World’s contribution to examined subjects. These include creative arts-music, languages and literature, geography, mathematics, European cultures, classical Greek, history, science, architecture and environment. Introducing Black pioneers of the internet and the World Wide Web to students will add diversity information technology and computer-aided design projects.

Second, the most talented icons of Black worth and success need to be drawn into the financing of cultural activities and events in Black communities. Civil servants, journalists and trade union members can mobilise their latent powers. Fraternal, trade and professional associations must rally their members.  Lawyers and solicitors, architects and sociologists could expose Black-White disparities in work, health, education and privilege in monocultural Britain.

Wealthy African/Caribbean celebrities- footballers and athletes, music moguls, fashion beauties and millionaire rappers and pop-stars - must put something in the donation plate. The self-acknowledged metropolitan elite in business, banking and finance have a duty to promote the arts and culture in Black communities.

This new “tithing” principle is linked to the emerging view that “You can’t pray the devil back to hell”. “More church leaders need to look at the way they can serve their members, says Marcia Dixon (in Soul Stirrings, in The Voice newspaper August 23-29, 2010). Funding cultural charities and trusts, gospel and choral groups should complement their community services.

However, the clergy of the 4,300 inner city Black majority churches have a special role to play. They could campaign for the cash losers imperilled by the cultural budget cuts.

Third, Black intellectuals should refute the stereotypes and slander that limit the creative potential of Black communities. They have the scholarly resources to enrich the fragile roots of Black British cultural heritage, of which Carnival is an important part.

Furthermore, beating the “pan” for Black culture and expression, they can muster the creative energies of British African/Caribbeans to:

These creative endeavours will prove the slanderers wrong. The carnival’s Caribbean calypsonian roots date back to the West African Kaiso, and the griots that helped unite beleaguered peoples. The evidence shows Black people possess a humanity and heritage that is in no way different from that of other peoples in Britain and the world.

Finally, now is the time to fight back against racist slander and regressive budgetary cuts with forward planning for Black cultural advancement.  “Play mas” with pride. Yes.  However, "Ignorance of Black history and heritage breeds low self-esteem", warned the militant Black British parliamentarian Bernie Grant. “Liberate ourselves”, he told his followers at the October Black History Month 1987 launch of the African Jubilee Year and Marcus Garvey centenary.

Hence, forward planning for cultural progress is of utmost importance. The annual two-day Carnival that attracts a million revelers was meant to be a showcase of Black talent and culture. It is also a symbol of an enduring truth of the Black cultural experience, as Claudia Jones “Mother of the Notting Hill carnival” proclaimed: “A people’s art is the genesis of their freedom.”

*This is the seventh instalment in the Black History Month 2009-10 series on Unshackling the Afro-British Mind published here by the author. It is hailed as essential reading for anyone who wants to chart the present failures and future prospects in the State of Black Britain. Thomas L Blair is a Black scholar and independent commentator on Black urban affairs at http://www.Chronicleworld.org.  Details of his book THE AUDACITY OF CYBERSPACE -The struggle for Internet power can be viewed at http://thomblair.org.uk and http://bit.ly/m-ybooksblair  and is highly recommended by the citizens’  journal http://www.The-Latest.com.

Who will claim the bodies of unknown migrants?