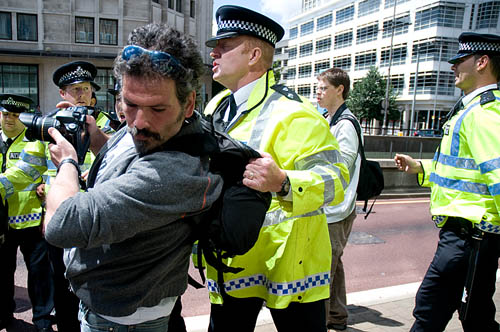 Britain's trade union for journalists has welcomed a call by the Metropolitan Police Authority’s civil liberties panel for London’s police to work better with the media.

The MPA report into the controversial policing of last April’s G20 demonstrations – when newspaper seller Ian Tomlinson was killed – says all police officers on the ground should be able "to recognise the press card, its security measures and the status it gives journalists."

The civil liberties panel declares: ”The press play a major role in providing the transparency that is vital to ensure public trust in policing is maintained.

"There was much debate about the press card, what it means in terms of access and the level of understanding amongst police officers." Commenting on its discussions with journalists, the panel note: "The clear impression of the representatives at the meeting was that the levels of understanding are low. The press card, at protest meetings and demonstrations, should allow holders to access to all parts of a protest in and out of police cordons in the event of containment. They reported to us that they had been prevented from doing this during G20 and other events. They were given several reasons by the police officers they encountered including that it was for their own safety or that the cards might be forgeries."

National Union of Journalists general secretary Jeremy Dear said: “Recognition by the report of the importance of the role of photographers and reporters in observing police behaviour at demonstrations is welcome. Too often our members across the UK have experienced harassment by police officers who seem indifferent to the production of official press cards which the police authorities recognise as establishing the bona fides of legitimate news gatherers.

“We now hope that the message will get through to police officers at all levels that journalists should be allowed to do their job without harassment.”