Call me a cynic but sorry, I can’t believe that all of it is heartfelt and genuine.

If a top Black athlete today converted to Islam and then declared that he wouldn’t “help murder and burn another poor nation to continue the domination of white slave masters of the darker people the world over” because his real enemy was at home he would be denounced as a traitor, as anti-American.

If that top Black athlete today called for reparations, saying the US government should admit its guilt over slavery and take $25bn from its defence budget to build houses for Black Americans he’d be dismissed as a divisive crackpot.

If that top Black athlete today declared his support for the Palestinian struggle to liberate their homeland and oust the Zionist invaders he’d annoy a lot of top politicians and might even be labelled an anti-Semite. Those are the exact things that Ali did say. And he was reviled for it.

He was attacked. Demonised. “Millions hated Ali,” said leading American sport writer David Remnick, after he denounced American war-mongering imperialism and refused to fight in Vietnam. Another, Red Smith called him a “punk” And Jim Murray said Ali was the “White man’s burden”.

The US security services tapped the boxer’s phone. Yet, today he is lauded by the same types of people who slammed him in the ‘60s and ‘70s. He is praised by politicians and media elites who describe him as an anti-establishment showman who transcended borders and barriers, race and religion. 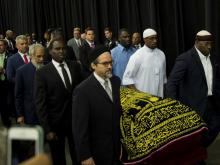 As one commentator put it, throughout US history white Americans have toned down the life stories of radical people of colour so they can celebrate them as they want them to be, not as they were. But the inconvenient truth for establishment types now jumping on the Ali bandwagon is that he was a radical, a revolutionary, a proud Black Muslim American who railed against both domestic racism and foreign wars. 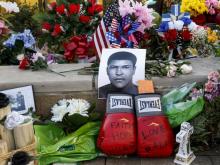 Now, I’m not saying it’s not a good thing that so many powerful people have either changed their views on what Ali stood for or pretended not to notice what he stood for. Nor am I saying they are all hypocrites. No, all I want is a little more consistency and a little less white washing of history.

Let me finish with a line from a poem by Maya Angelou: “People will forget what you did, but people will never forget how you made them feel.” Muhammad Ali made millions of people feel proud of our identity, our ethnicity, our political views, our religious beliefs. Rest in peace my brother.

* Mehdi Hasan said this in a broadcast on Al Jazeera