Britain's most famous public relations guru to the stars has been found guilty and jailed for eight years for a string of indecent assaults on teenage girls over a period of more than three decades.

Max Clifford, aged 71, the king of the sleaze peddled by his best customers the red top tabloid UK papers, became the first person to be convicted, under the high profile Operation Yewtree sex crime investigation, at Southwark Crown Court on April 28.

He was found guilty of eight indecent assaults, cleared of two and the jury was unable to reach a verdict on one other. One of his best customer, The Sun, headlined an article after Clifford's convictions for sex crimes "Paedo TV boast led to the trial". It reported Clifford as recalling that "huge names in the '60s and '70s had young girls throwing themselves at them in their dressing rooms at concert halls, at gigs, wherever". And they (the stars) "never asked for anyone's birth certificates".

Following Clifford's provocative remarks made on TV in October 2012, several of his victims, who were outraged by them, went to the police after decades of cowed silence.

At his trial the court heard Clifford treated his posh central London office as his own “sexual fiefdom” to do as he pleased with a number of victims between 1966 and 1984.

He is the first person convicted under Operation Yewtree, the police investigation set up in the wake of the sex scandal involving the late BBC TV personality Jimmy Savile.

Clifford had denied all the charges and Richard Horwell QC, his barrister, said the trial had been “haunted by the spectre of Jimmy Savile”.

Horwell said his client admitted to having affairs but added that his “sex life and adulterous relationships are not on trial”.

In addition to the seven women on the indictment, a further six gave evidence as supporting witnesses, revealing how they too had fallen foul of Clifford’s wandering hands.

Clifford was a key player in the British media in the 1990s and 2000s, orchestrating tabloid revelations about the sex lives of politicians, including David Mellor and John Prescott, sporting figures such as David Beckham and Sven-Goran Eriksson and actors including Jude Law. Some journalists complained that, at the height of his career, Clifford might as well have been editing the News of the World, Britain's biggest selling paper, as he had so many stories in it every week.

His reputation in tatters, Clifford left Southwark Crown Court, after being found guilty. with his daughter, Louise, and a group of supporters. It was intriguing to note that his wife, Jo, did not turn up to any of the court proceedings. Commentators have said she is planning to divorce him and his once highly successful company, Max Clifford Associates, faces meltdown with star clients deserting it in their droves.

The publicist, who made millions of pounds helping celebrities in the public eye. They included Muhammad Ali and O. J. Simpson, the American football star and actor accused of murdering his wife and her lover. Just as controversially, he gave free advice on how to handle the media to the murderers of Black teenager Stephen Lawrence in a 1993 racist attack in London UK. All five of the men had several meetings with Clifford. He introduced them to TV journalist Martin Bashir who interviewed them for a special edition of BBC's Panorama. It was a PR exercise by the killers to win them public support. Editor of The-Latest.Com, Marc Wadsworth, robustly challenged Clifford about this at a City University, London, debate.

Clifford once boasted to Wadsworth he was paid more to keep embarrassing information about stars out of the papers than he was to get stuff printed. Lap dancers and call girls were paid hush money by Clifford not to dish dirt on sleazy celebrities he represented. Then they would be photographed and followed by Clifford's gangster heavies to make sure they stuck to their word. 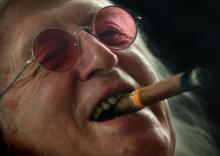 Clifford was arrested by detectives from Operation Yewtree in December 2012, and charged in April the following year. The investigation, an inquiry by the Metropolitan police into historic allegations of sexual offences, was prompted after claims were made against the late BBC Radio One and Top of the Pops DJ Jimmy Savile.

His guilty verdicts were delivered in a hushed but packed courtroom, by the forewoman of the jury on its eighth day of deliberations.

Clifford sat still in the dock as the jury forewoman returned the verdicts. He could be seen breathing deeply as he listened through a hearing loop.

During the trial, Clifford admitted attending sex parties in his younger days.

Peter Watt, director of National Services at the NSPCC (National Society for the Prevention of Cruelty to Children), said: "Max Clifford has rightly been unmasked as a ruthless and manipulative sex offender who preyed for decades on children and young women."

He added" "Clifford was a rich and influential man who dined with the stars but the way he manipulated and groomed his victims is typical of many sex offenders. He exploited their vulnerabilities, using lies and coercion to get what he wanted."

Watt went on: "Throughout the court case Clifford has behaved dismissively and arrogantly towards his victims and the suffering he has caused them. He made them go through a long and painful court case and relive their traumatic experiences by not pleading guilty."

"Many of his victims innocently came to him hoping he could make their dreams come true, dazzled by his celebrity connections. But he saw women and young girls as sexual objects for his own gratification. Instead of helping their bids for stardom he indecently assaulted them before casting them aside."

"Intimidated by his power and wealth, many of his victims did not initially speak out. But the courage they have shown in telling police what had happened to them and giving evidence means they have finally got justice."

During the trial prosecution had claimed Clifford was a "repulsive" sex offender who sexually abused teenage girls.