President Obama would seek agreement on gay US soldiers 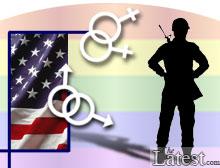 Democratic candidate for president of the United States, Barack Obama, has said in an interview with gay news outlets that he wants a full debate about the ban on openly homosexual people in the US armed forces.

His Republican opponent, Senator John McCain, did not respond to a request for an interview from Gay History Project.

In a series of written answers, Barack Obama, the first African American to be nominated for president by a major party, said he and his wife Michelle do not worry about the threat of assassination.

He also said that gay rights are "part of this broader human-rights discussion" with other nations.

It bars openly gay, bisexual or lesbian people from serving in any of the US Armed Forces and prohibits the military from asking questions about a service member's sexuality.

Senator Obama has previously stated his personal opposition to the ban, but in his responses to Gay History Project revealed that he would not use the office of President to abolish it.

"I want to make sure that when we revert "Don't Ask, Don't Tell," it's gone through a process and we've built a consensus or at least a clarity of that, of what my expectations are, so that it works," he wrote.

"My first obligation as the President is to make sure that I keep the American people safe and that our military is functioning effectively.

"Although I have consistently said I would repeal "Don't Ask, Don't Tell," I believe that the way to do it is make sure that we are working through a process, getting the Joint Chiefs of Staff clear in terms of what our priorities are going to be.

"That's how we were able to integrate the armed services to get women more actively involved.

"At some point, [you've] got to make a decision that that's the right thing to do, but you always want to make sure that you are doing it in a way that maintains our core mission in our military."

A survey by the Washington Post and ABC News in July found that three-quarters of Americans think that openly gay, lesbian and bisexual people should be allowed to serve.

64% of Republicans and nearly two thirds of self-described conservatives backed a change in the current law, as did 57% of white evangelical Protestants and 82% of white Catholics.

Senator Obama said that he did not think the Republicans would be able to use gay rights as a 'wedge' issue to energise religious voters as George Bush did to great effect in 2004.

"I think that the American peoples' attitudes with respect to LGBT issues are continuing to evolve," he said.

"I think people are becoming more and more aware of the need to treat all people equally regardless of sexual orientation.

"There are some people who disagree with that, but frankly those folks - many of them - probably have already made their minds up about this election earlier."

Senator Obama said that if elected in November, the rights of LGBT people across the world would be on the agenda.

"The treatment of gays, lesbians and transgender persons is part of this broader human-rights discussion. I think it is not acceptable that we would in any way carve out exceptions for our broader human-rights advocacy to exclude violations of human rights based on sexual orientation. I think that has to be part and parcel of any conversations we have about human rights."

During his campaign for the nomination his opponent Senator Hillary Clinton was criticised for comparing him to Bobby Kennedy, who was assassinated while running for President.

In his responses to the gay press, Senator Obama said that he does not worry about being targeted because of his race.

"We don't spend time worrying about security issues. We have secret service protection, which is the best in the world.

"Obviously we take precautions and listen to them, but what I spend the day thinking about is how do I get my message out that we need to change this country to make it more just and more fair, to make sure the economy is growing on behalf of middle-class Americans, make sure kids can go to college and bringing this war in Iraq to an end. That's what I spend my time thinking about."

Americans will elected the 44th President of the United States on November 4.

A 14th to 16th September Gallup poll shows Obama with a two percent lead over the Republican.