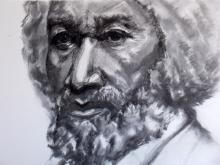 African American anti-slavery leader Frederick Douglass is the subject of a picture specially picked by judges to go on public display today at a prestigious British art gallery.

It was painstakingly created in charcoal by Deborah Hobson, deputy editor of The-Latest.Com, who has pursued her love of drawing after studying art at A level in school many years ago.

She said: “While researching information for The-Latest, I came across an intriguing image of Frederick Douglass and read about his remarkable life as an abolitionist, a great orator and the first Black person to run for the American vice-presidency [in 1872]. I just felt I had to draw him.”

The exhibition has been organised by the Dulwich Picture Gallery as part of the venue’s 60th anniversary celebration. A spokesperson said: “We are proud to have been able to provide this unique opportunity for the public to have work shown at the world’s very first purpose-built public art gallery.”

Two hundred and thirty artists submitted 569 artworks. Ian Dejardin, the Sackler-sponsored director of the gallery, headed a panel of judges that included Rebecca Fortnum, Clive Head, Nicky Hirst and Elo Schuneman, who whittled down the selection to just over a hundred that went on display for sale.

Hobson exclaimed: “I was over the moon when I was told that my drawing had been chosen to go on display by the eminent judges.”

Speaking at a special invite-only viewing last night, landscape artist Buffy Moyse said of Hobson’s work: “It’s lovely. A wonderful drawing. I feel I would recognise that man in the street if he walked past.”

Other works to catch the attention of The-Latest included Dutch-born fine art photographer Yoke Matze’s enigmatic Girl on bark. Sepia coloured, its sultry eyes draw in and fascinate the viewer. Matze used her liquid light technique to get the results she wanted for the photograph.

Pismo beach by Klara Brunhuber, is an impressionistic painting that exudes the heat of the Californian resort it depicts. It is an endearing, stand out work that has a kinetic energy and a stellar £10,000 price tag.

That sum is just a thousand pounds more than the magnificent oil portrait of Bruce Willis lookalike TV actor Pip Torrens by Terry Kent. His use of light is fantastic and attention to detail – stubble on Torrens' chin and writing on a document he is reading – amazing.

Annette Hamley-Jenkins is just as skilful in the use of luminous reflective light in her painting, Eagle pond, Clapham. It is therefore no surprise her website is called painting shadows.

We bumped into third prizewinner Gerry McCulloch, a Scot who lives in England with his Japanese partner. His work that captivated the judges was an engaging photographic work titled Ohuna, of a blurry scene at a Japanese railway station.

One of the Goldsmith’s College senior film lecturer’s claims to fame is that he was a tutor of Oscar winning movie director Steve McQueen, whom he described as memorably “extremely enthusiastic about everything he did”.

McCulloch was delighted to win a prize, but remarked: “Art is very much a lottery. You never know who’s going to win in competitions because it’s a matter of taste.”

Go along to the exhibition and judge for yourself. It will be open to the public until October 12.