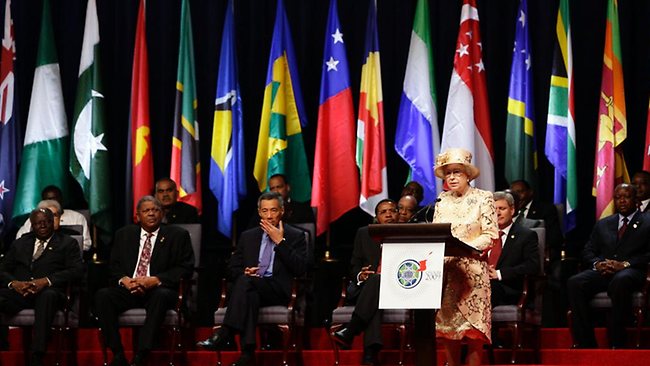 Celebrations for Queen Elizabeth II's diamond jubilee are reaching fever pitch in Britain, but apathy rules elsewhere in her far-flung realm as critics assail the relevance of a colonial-era monarchy.

The queen has been head of the 54-nation Commonwealth since her accession to the throne in 1952 and remains the constitutional monarch of 16 sovereign states, including Australia, Canada and New Zealand.

In Britain, four days of events run from June 2 to June 5 to commemorate her 60 years on the throne with a 1,000-boat river pageant on the Thames, a concert featuring some of pop's biggest names and a ceremonial parade.

Informal celebrations will be held up and down the country as people host street parties in a bid to recreate the spirit of the silver jubilee in 1977.

No state events are planned in India, which six decades after becoming an independent republic has cast off the baggage of colonial rule. The general attitude towards the royal family is one of benign indifference, experts said.

"The queen is a symbol of a past that has been pushed away, but if she ever visits India she would be given a nice, respectful reception just like one gives to their grandmother," said Indian author and journalist M.J. Akbar.

In Australia, a former penal colony where the queen enjoyed a successful tour last year, few activities are planned.

Canberra has pledged $5 million (£3.2 million) donation to the Queen's Diamond Jubilee Trust, commemorative stamps and coins will be issued, and Prime Minister Julia Gillard will light a beacon at Parliament House.

Perth has also announced it will name a new waterfront precinct Elizabeth Quay. But unlike for her silver jubilee, when the queen visited Australia and parties were widespread, there is no groundswell of emotion.

Australians for a Constitutional Monarchy chief David Flint blamed Gillard's Labour government, which insists the ultimate goal is for Australia to become a republic despite a 1999 referendum that rejected the idea.

"They just want to get rid of the crown, but they are out of touch with the majority of people," said Flint .

"Unfortunately, celebrations will be around TV screens."

Even that is in doubt. While the taxpayer-funded Australian Broadcasting Corporation has been running a series of royal documentaries, it is not covering the London celebrations live on its main free-to-air channel.

Instead, it plans to screen the 1970s film "Shampoo" starring Warren Beatty during the Thames pageant.

"The ABC plans to screen a film about a sex-crazy hairdresser who seduces women instead of the jubilee of a queen who has performed impeccably for this nation."

David Morris, director of the Australian Republican Movement, said Australians feel "affection" for the queen and would congratulate her for serving 60 years on the throne.

"But Australia has come of age. It's a modern, multicultural nation and the jubilee is not about Australia, it's about Britain. There just isn't much interest in it here," he said.

It is a similar story in New Zealand, a country the queen has visited 10 times but not since 2002.

The government has encouraged communities to organise their own celebrations rather than putting on a state-sponsored jamboree, but New Zealand Republic chairman Lewis Holden said there was a general feeling of "who cares".

"There are a few private organisations, British pubs and the like, which are holding events but most people are apathetic," he said.

The British Club in Singapore has planned a weekend of balls and luncheons and the High Commission in Malaysia will organise a reception, but, as in other countries, they appear to have little significance to locals.

Canada, whose conservative government has been restoring royalist emblems in public life, is bucking the trend with US$7.4 million (£4.7 million) allocated for grassroots celebrations across the country.

"By supporting this most historic and significant anniversary, our government is delivering on its commitment to reinforce our heritage through active celebration of our institutions that define who we are as Canadians," said Heritage Minister James Moore.

Prince William, the queen's grandson, and his new wife Catherine were feted by the Canadian public on their first official overseas trip in mid-2011. But, like Australia, Canada also has a vocal pro-republic campaign.

Meet the Royal in the Sex and Coke Scandal

Religious belief 'plummets after horrors of 2016'