Racists use Facebook to turn their sights on refugees 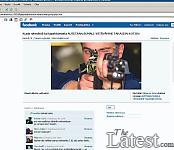 "Let's help our Somali friends get back home", declares a headline on a page in Facebook. Next to it is a picture that used to grace wrappers of a certain type of Finnish liquorice - a caricature of a   Black man that The-Latest successfully campaigned against.

The declared purpose of the online community is to raise funds to send Somalis out of Finland. A bit lower on the page is a picture of a man aiming an assault rifle in the direction of the camera. The caption reads:  "The alternative to leaving the country".

Usually this kind of bluster on the internet is anonymous and without much significance. By Wednesday 14,000 people had joined the group, using real names and their own faces. Most of them are under the age of 30.

These would seem to be some of the racists that have been in the news so much lately. Sorry, perhaps we should call them immigration-critical, lest the racists take offence.

The reasoning in the groups is that the Somalis are a problem because they are Somalis. The Somalis live on Finnish taxpayers' money, they say, depriving Finns of homes and jobs. Or, as Lauri Vidberg writes on the group's message board:  "It's easy to use our tax money to buy Armani shirts and Lacoste sneakers."

Minja HÃ¤nninen asks:  "Why can refugees come here, when we have people of our own who are doing real bad?"

Until now, the idea that people should be judged by what they do and not for being of a particular nationality has been at the heart of Finnish democracy. The Facebook group is the idea of Rami SipilÃ¤ from Urjala.  "What is the purpose of this group?"

"If the north of Somalia has been deemed safe to live, then what are they doing here using our tax money?" SipilÃ¤ asks.

So don't the Somalis have a right to be in Finland any more?  "If they go to work and pay taxes, then OK, but they don't do that very often."

A decision by the Supreme Administrative Court in December to allow the deportation of two Somalis to their country of origin is having its consequences. According to the court, the unrest in North Somalia is no longer an impediment to deportation. However, the Ministry for Foreign Affairs says that all parts of Somalia are dangerous, and urges all Finns to leave the country.

SipilÃ¤ denies any knowledge of the picture with the rifle, even though it has been on the front page of the website for a week. After the interview, conducted on Thursday evening, SipilÃ¤ removes the picture. Others go up, with swastikas and Somalis. Many of them are also removed.

On Thursday, the Helsinki Times, the commercial TV network MTV3, and the Finnish Broadcasting Company (YLE) report on the hate group. The publicity leads to about 2,000 new members.

Finland's Ombudsman for Minorities    Johanna SuurpÃ¤Ã¤ said that she is investigating as to whether or not those behind the site could be charged with incitement against an ethnic group. Let's ask the opinion of a Somali.

Helsinki resident Abdirahim Hussein, age 30, laughs when he hears about the hate group. He is an interpreter and a municipal politician of the Centre Party.  "How do I feel? That's a funny question. Is this a trick question, then?"

On hearing that the leader of the group says that Finnish taxpayers' money should not be spent on giving Somalis a livelihood, he responds:  "Where in the world is that guy living? In Finland?"

Hussein says that during the recession of the 1990s there was a prevailing image in Finland of Somalis as tax scroungers. Whenever there's a recession, there's a search for scapegoats, and the present slump is no exception.

"I stand out, even if I stand among ten thousand Finns. I always stand out because of my colour", he says. "I just got off work. I have an eight-hour workday behind me and six hours ahead. Then somebody goes and says that I use taxpayers' money. That is a very deep personal insult."

Police must not be 'overwhelming and oppressive' at Carnival

Become a Commonwealth community reporter and win an iPod