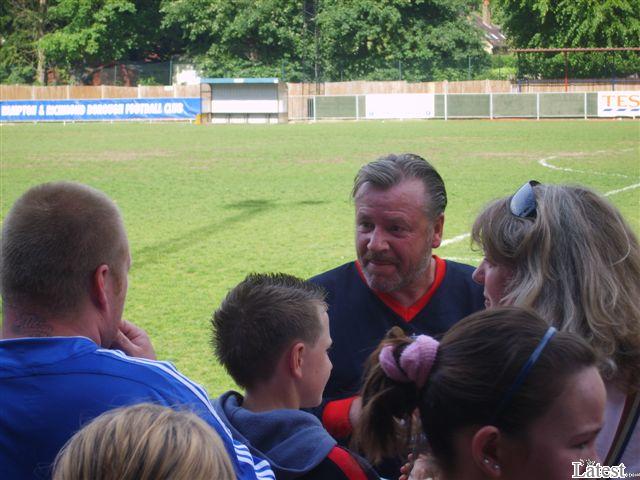 Eleven celebrities showed off their footballing skills at a charity match against local football team Hampton and Richmond Borough FC.

President of The Shooting Star Children's Hospice The Duke of Northumberland, said: 'Discovering your child has a life limited condition must be one of the most devastating experiences a family can encounter, but the care and support provided by a children's hospice can allieviate much of the strain.'

'There is no statutory funding for children's hospices so the  £2.5 million needed each year to maintain the care service provision, has to be raised from charitable fundraising and donations,' he added.

The 90 minutes extravaganza ended in the celebrities defeating the local team 5 - 4, after they were 2 - 0 down in the first half.

Actor, Winstone, was the eagerly anticipated celebrity at the event. He is famous for his hard man antics in front of the camera, but came to show off his on pitch exploits.

A football and Ray Winstone fan, said: 'It's all in a good cause, and the  £10 entry fee was worth it to see the legend Ray Winstone.'

Road works that go on and on...