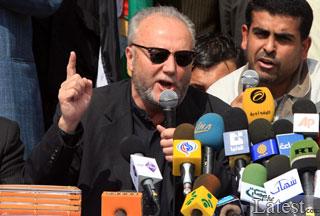 UK lawmaker George Galloway, an organiser of a Israeli blockade-busting food convoy aimed at helping Palestinians in Gaza, says he will not be convicted for violating the EU sanctions on the besieged Middle Eastern territory.

The "Viva Palestina" operation has handed over more than  £1.5m of humanitarian aid to the Hamas government in the Gaza Strip.

Galloway told Press TV that the Viva Palestina campaign had also nullified the sanctions imposed by the European Union on the Gaza Strip through distributing cash in the impoverished territory.

"We are giving you now 100 vehicles and all of their contents, and we make no apology for what I am about to say. We are giving them to the elected government of Palestine (Hamas)," said the outspoken lawmaker at a press conference on Tuesday.

"I say now to the British and European governments, if you want to take me to court, I promise you there is no jury in all of Britain who will convict me. They will convict you," he added.

The convoy, which arrived in Gaza through the Rafah border crossing on Monday, set out from London last month but was temporarily halted in Egypt where it was attacked by assailants linked to the Egyptian security agency.

It, however, broke the 19-month Israeli blockade which had been kept during the recent Israeli war in the region.

Israel launched its invasion of the Gaza Strip in December, leaving at least 1,300 people killed and thousands of others wounded and displaced.

<p><strong><u>Chris Gaynor</u></strong></p> It's funny how Galloway pops up when something big happens...