The 40-year-old New Yorker was in town to tie-up a deal with the British broadcaster to do an undisclosed stunt during which Blaine said he was going to "risk my life", The-Latest can exclusively reveal.

Blaine is internationally known for his dare devil feats of endurance and is famous as a performer of street and close-up magic. He has performed globally and has set and broken several world records, including holding his breath for a phenomenal 17 minutes and four and a half seconds while submerged in an 18 hundred gallon water tank. 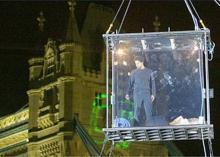 Blaine first made headlines in the UK, on September 5, 2003, when he began a 44-day endurance stunt sealed inside a transparent Plexiglas case suspended nine metres (30 ft) in the air next to Potters Fields Park on the south bank of the River Thames, London - the area between City Hall and Tower Bridge.

The stunt got lots of media attention. The Guardian said: "Blaine has created one of the most eloquent and telling visual images of our time." The Times reported that: "1,614 articles in the British press have made reference to the exploit." US President George W. Bush referred to Blaine’s stunt in a speech at the Whitehall Palace in London, at the time, saying: “The last noted American to visit London stayed in a glass box dangling over the Thames. A few might have been happy to provide similar arrangements for me."

On November 27, 2000, Blaine began a stunt called "Frozen in Time," which was covered on a TV special. He stood encased in a massive block of ice in Times Square, New York. He was lightly dressed and seen to be shivering even before the ice was sealed around him. A tube supplied him with air and water while his urine was removed with another tube. He was encased in the ice for 63 hours, 42 minutes and 15 seconds before being removed with chain saws. The ice was transparent and resting on an elevated platform to show that he was actually inside it the entire time.

In October 2012, Blaine performed a 72-hour endurance stunt called "Electrified: One Million Volts Always On" atop a 22-foot high pillar in New York. It was livestreamed on YouTube. A system of seven Tesla coils produced an electric discharge of at least a million volts continuously for the duration.

These seven electric coils were directed at Blaine for the entirety of the endurance stunt, during which he neither ate food nor slept. He wore 34 pounds of gear, including a chain mail suit. John Belcher, a physics professor from the Massachusetts Institute of Technology, reportedly said: “He has a conducting suit, all the current is going through the suit, nothing through his body."

He said his formula for success as a magician could be summed up in the three words he lived by: "Meaningful, interesting, believable. Is it meaningful? Is it interesting? Is it believable?"

Dolkar, a fan on Instagram, described Blaine as: "The coolest and craziest man on earth...a most fascinating person."