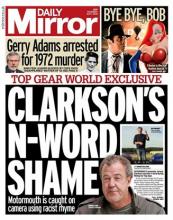 Star of the BBC's internationally popular Top Gear motoring show, Jeremy Clarkson, has apologised and "begged for forgiveness" after a clip of him reciting the deeply offensive nursery rhyme Eeny, Meeny, Miny, Moe was published by the Mirror. The ditty contains the derogatory "n-word" commonly used by racists to describe Black people.

Clarkson said he "mumbled where the offensive word would normally occur" in two takes, when comparing two sports cars and used the word "teacher" in its place in a third. Although Jeremy Clarkson mumbles the offending word, the presenter clearly begins by saying the letter "n".

Political reaction split down party lines with Labour deputy leader Harriet Harman calling for the BBC to sack the presenter. In a Twitter post Harman said: "Anybody who uses the N-word in public or private in whatever context has no place in the British Broadcasting Corporation."

But Education Secretary Michael Gove urged the corporation not to axe Clarkson because he had been "clear in his apology". Clarkson and Conservative prime minister David Cameron are friends.

In a video posted online, Clarkson said he "did everything in my power to not use that word" and was now "begging your forgiveness for the fact that obviously my efforts weren't quite good enough".

Clarkson initially denied using the racist term, telling his 3.3 million Twitter followers: "I did not use the N-word. Never use it. The Mirror has gone way too far this time."

But the newspaper responded by posting a clip of the incident - which was filmed two years ago but not broadcast. Clarkson, who has made millions of pounds from his TV appearances and as a columnist in the right-wing Rupert Murdoch-owned Sun, the Mirror's main rival paper, appears to enjoy courting media attention through his oafish behaviour and has been accused of racism in the past.

The BBC apologised in 2011, after an episode in which co-presenter Richard Hammond called Mexicans "feckless [and] flatulent" and Clarkson joked they would not receive complaints because the Mexican ambassador would be asleep.

Apologies were also made for an episode broadcast in March, in which Clarkson used the word "slope" as an Asian man crossed a newly built bridge over the River Kwai in Thailand.

The use of the word - which is an insulting term for people of Asian descent - led to complaints and the threat of legal action from Equal Justice, a law firm specialising in discrimination cases.

George Ruddock, editor of The Voice, the UK's Black national newspaper, told BBC Radio 5 Live that, if it was clear Clarkson had used the offensive term, "the BBC should take some serious action".

He added: "If you were in a normal workplace and that was used, it would certainly call for disciplinary action. How often is he going to keep apologising for these things?"

The BBC, which, though it said it treated the matter very seriously and by giving Clarkson a "final warning", refused to fire him despite a public outcry that included a petition on Change.org calling for the presenter to be dismissed.

Simon Woolley, director of Operation Black Vote, said critics of Clarkson should avoid making him a martyr and hero for bigots by continuing to demand his dismissal.

"Whilst we should never accept Clarkson's or anyone else's casual racism, having effectively dealt with Top Gear's top man by extracting a humbling apology, we should now refocus our attention on those structural and persistent racial inequalities within the job market, education, health and the criminal justice system," Woolley told The-Latest.Com.