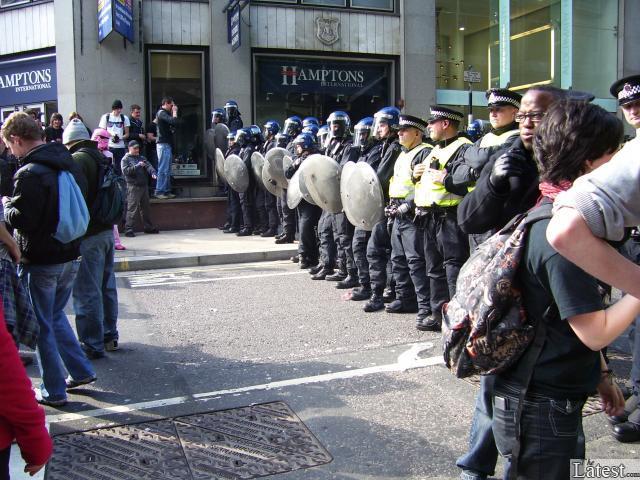 Big media headlines screamed "Riot police battle anarchists in City". One seasoned Fleet Street colleague told me wearily that press photographers and broadcast media cameras outnumbered G20 protesters when a man smashed a Royal Bank of Scotland window. But the real story of thousands of people - anti-capitalists, climate change campaigners and onlookers - put under siege by tooled up officers and not allowed to leave a small square outside London's Bank of England for more than eight hours was not told.

It was reported that a man died last night during the April 1 "Financial Fools Day" protests as a much-heralded event that began peacefully ended with officers saying bottles were thrown at police medics trying to help him.

The man had collapsed within a police cordon which laid medieval siege to the crowds who had assembled in central London and the City to protest over the G20 summit of world leaders. There were 63 arrests.

Scotland Yard said the alarm had been raised by a member of the public who spoke to a police officer on a cordon at the junction of Birchin Lane and Cornhill in the City.

He sent two medics through the cordon line and into nearby St Michael's Alley where they found a man who had stopped breathing. They called for an ambulance at about 7.30pm and moved him back behind the cordon where they gave him heart resuscitation. 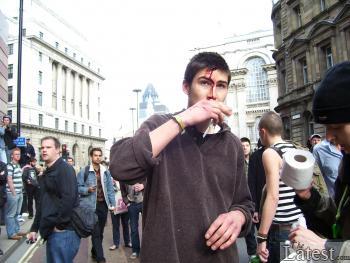 An ambulance took the man to hospital where he died. A London ambulance spokesman said: "Our staff immediately took over the treatment of the patient and made extensive efforts to resuscitate him both at the scene and on the way to hospital."

The Met called in support from 30 forces across the country to create a 5,000-strong team of officers for at least six diverse demonstrations in the City of London and Trafalgar Square.

Outside the Bank of England police horses and riot officers were pushed back by the sheer force of demonstrators  — helmets were torn from officers' heads and cans, fruit and flour rained down. In retaliation the police surged forward, cracking heads with batons, using pepper spray and CS gas, and sirens wailed all around.

Deputy Editor of The-Latest Deborah Hobson, who was there, said: "At first the area around Threadneedle Street, King William Street and Victoria Street had a carnival atmosphere, with people dancing to a reggae band, jugglers, young and old in fancy dress and placard waiving activists. Then things got ugly when the police decided to jam protesters, who surged forward towards the Bank of England, into a side street." 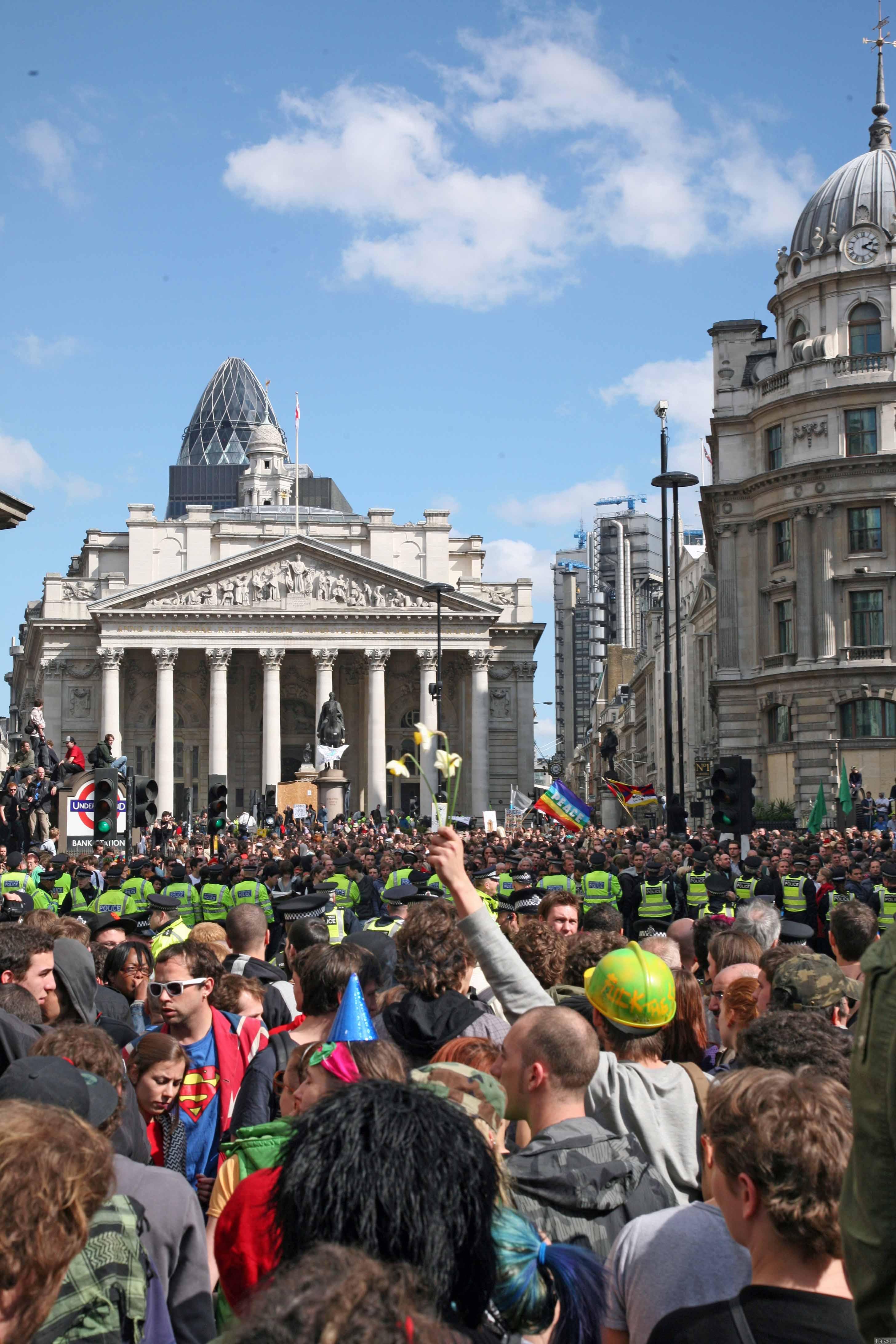 She added: "After that, riot police told us we could not leave. And it was hours before we were allowed to go home one by one and many people were searched first."

Photographer Cecilia Anesi, said: "What has happened after I left is horrible - a man even died. Friends of mine were trapped there, and police were beating up everybody. Then they also attacked the extremely pacifist 'climate camp'. We were kept there by the police like mice in a trap."

I saw a handful of demonstrators clearly goading officers. One, who resembled an albino ant with a bloodied head when viewed in a crowd scene broadcast on Sky Tv, bopped provocatively in front of police lines.

Police lunged at and punched protesters, some of whom could be seen attacking them with missiles and other weapons. I saw a police inspector lash out at a young man insulting one of his menacing constables.

Wayne, a large, beer-bellied man in his late 20s from Cheshire, who wore an American football shirt like a British soccer fan, complained bitterly that anarchists had not stormed the Bank of England when they broke through police lines near the hated City institution.

He quipped: "Couldn't they have shown some organisation? All we needed was a leader and the bank was ours. Capitalism has ruined the world and Britain is fucked. Who needs the Queen? Who needs government? The real rulers are the multi-nationals who never stand for election and are only accountable to greed." 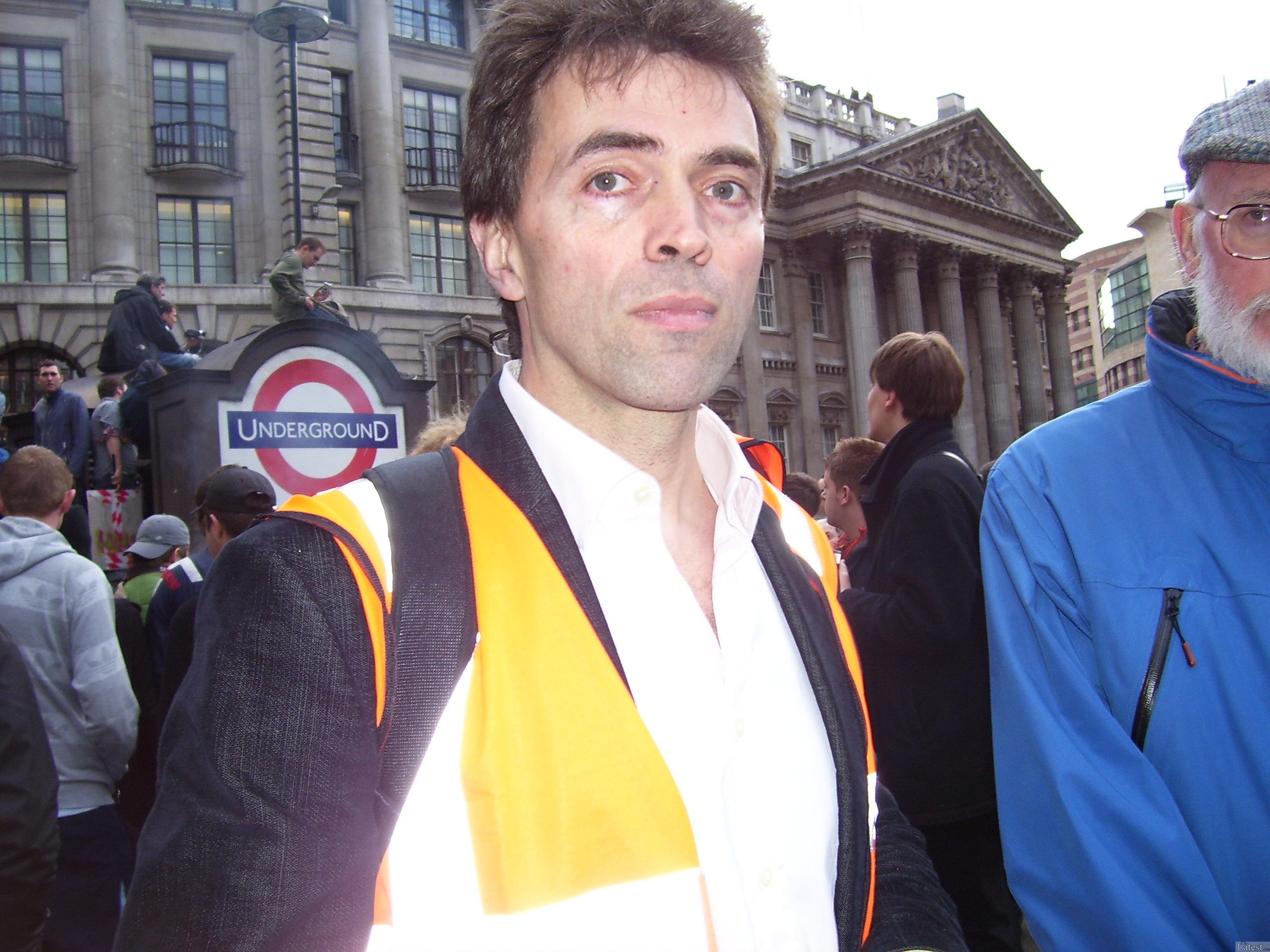 Tom Brake, Liberal Democrat Member of Parliament for Carshalton and Wallington, was invited to be a "legal observer" at the G20 protests by the climate change camp. Asked by The-Latest to comment about policing in the area around the Bank of England and the fact that masses of people were prevented from leaving, he said: "Earlier in the day policing was fine but things seemed to have got bad later on. The last time this sort of thing happened there were some legal challenges brought by demonstrators but they were not successful."

He later remarked that the police actions in stopping the free movement of protestors "went on far too long".

Are you worried about your online reputation?

Producers of top musical sued for 'ripping off' writer