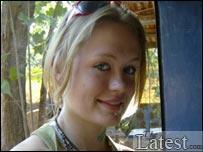 Detectives investigating the rape and killing of Scarlett Keeling are in a serious state of panic. At first they said her death was due to drowning. Then, after a second post mortem that revealed terrible vaginal injuries as a result of an extremely violent sexual assault, they said she had been murdered.

Keeling, 15, of Bideford, Devon, was found drowned last month. Police initially said she had died after drinking too much. Local barman Samson D'Souza, 29, has been charged with rape but not with murder.

Goa's Tourism Minister Francisco Pacheco has stated that Indian police deliberately covered up Miss Keeling's murder. He told the Reuters news agency: "This is a clear case of murder and it has gone out of proportion because police tried to cover it up."

A murder inquiry was eventually started on the recommendation of doctors who examined Keeling's body.
D'Souza told the court in Mapusa on Monday that he was with Keeling the entire night and left her at 0500, but she was still alive then.

He was detained by police after witnesses said they saw him with Keeling shortly before her body was found at the Anjuna resort on February 18, which is popular with Western dance music party crowd. Fiona MacKeown, Keeling's mother, was on a six-month holiday with her boyfriend and six other younger children when her daughter died.

The rest of the party were travelling to a neighbouring state while Keeling stayed with a tour guide in popular Anjuna. MacKeown, who has said from the beginning that her daughter was sexually assaulted and murdered, has criticised the police investigation.

She told BBC News: "I'm not confident that they've got the right person, I think they're just making a public show to be honest. We've had many reports that they've done this before with other cases for a start-off and I just think they're going to continue to try and cover themselves up and their mistakes."

She said she thought it possible more than one person was involved in the killing. A second post-mortem examination discovered there was not enough water in the dead girl's lungs for her to have drowned.

The doctors who carried out the latest examination discovered some 50 bruises and abrasions on Keeling's body and unanimously recommended police open a murder inquiry into the death. MacKeown, who described Keeling as "a really affectionate, loving girl", is preparing to fly her daughter's body back to the UK before returning to India to help with the investigation. D'Souza has been remanded in custody.

Favourite culprits to blame for rising crime are foreign tourists and then the home-grown variety. One hundred and sixty six foreigners have been killed in Goa in the past two years. Politicians in the state, on India's west coast, seem to be perpetually confused. They actually do not know what statements to make, whom to blame and, most importantly, cannot suggest an effective course of action for dealing with this level of crime.
One day they are lambasting the tourists for their "frivolous" drink and drugs lifestyle, other days they are threatening local criminals. But their favourite villain is...yeah, no prize for guessing...the media. The government machinery, which works with a speed which makes the arctic jellyfish look like a formula one wheely, have at last woken up and demanded strong action against the police and the doctors involved in the first post mortem of Scarlett Keeling.
Pacheo said that he "comprehended" (thankfully) the dubious role of the police and possible foul play.Last but not the least, not a single human rights organisation has spoken out about the levels of crime in Goa. Their activities seem to be centred around televised lectures, coffee shows, some candle lit marches and road side postering. Talk about hypocrisy.
* A second man has been arrested over the death and has appeared in court accused of involvement in Keeling's murder. Placido Carvalho is being investigated over the drugging, rape and murder of the teenager, but has not been charged.

He was remanded in custody for 14 days, the same as D'Souza, to give police more time to quiz him.Carvalho was detained on Wednesday after giving himself up voluntarily. Police allege Carvalho intentionally supplied ecstasy and possibly other drugs to Keeling before she was raped.
Keeling's mother, Fiona MacKeown, said the case remained unsolved, despite the two arrests. In a statement released through her lawyer, the 43-year-old said: "The arrest of two low-level persons, to my mind, is certainly not a completion of the investigations."

Her lawyer, Vikram Varma, said on Thursday that he expected further arrests in connection with the rape and murder.Miss Keeling's naked and battered body was found on a beach in Anjuna three weeks ago.

MacKeown is waiting for a response from India's prime minister to her claims there was a police cover-up over her daughter's death.In a letter to Manmohan Singh, Ms MacKeown, said: "I have no faith in the leadership of the Goa police. The administration tried its best to hush up the death as a simple case of drowning."

Speaking in Anjuna, Goa's police Inspector General Kishan Kumar said that once the police investigation had come to a conclusion about the rape and murder of Scarlett "we will look into other aspects".That could include the possible neglect of the teenager, said Kumar.

MacKeown had left her daughter at the resort with a friend while the rest of the family travelled further afield. The mother, who has denied neglecting her daughter, said: "I think I was probably naive and too trusting of the people around her that claimed to be her friends, but that was probably the worst thing I have done."

5 Responses to "Scarlett Keeling and the 'pathetic Goan police'"

Sumantra Maitra you&#39;re a complete moron because of the lack of facts in this story. Your blatant misdemeanour just makes your article a lot less credible and affirms my opinion that you have based the report on what you have watched on television and read in the print media ... get your facts straight before you choose to opinionate. Facts : 1. Scarlett Keeling was on drugs and alcohol but that does not give anyone the right to rape and kill her 2. the police have been slacking in their approach and this case is being over rated with the media blowing it out of proportion NDTV reported &quot; drug mafia nexus cover up &quot; , anything is been said to sell the story at the cost of Goa&#39;s image. 3. the media attention around the case is good as it has put pressure to solve it and bring the accused to justice. 4. her mother is not exactly an ideal role model and though much is being said about her past, that is not of importance at the moment .. . had she been around , she would have put a check on her 5. i would be interested in knowing where you got your statistics from ? true that many people may have died here but tourists die at many destinations all over the world , Ibiza , Kerela , Dubai etc .. . what needs to be done in this hour is to re-affirm Goa as a safe place by delivering justice 6. Anjuna is known for its trance , drug culture .. . I am Goan and ask anyone from our state they&#39;ll tell you the same thing and majority of the tourists visiting this area are &quot; hippies &quot; 7. you must keep in mind that this girl was abusing the laws of the state at 15 i think you are smart enough to know the effects of smoking up or doing cocaine or what ever she was on 8. right now amidst pressure to solve the case the police will look for scape goats to push the case on to and solve it , if you do read or watch the media ... form an opinion once all the facts are out

<p>I am a freelance reporter and I have been to the place before reporting. The point raised about my story hurting Goa&#39;s image is a bit farfetched. Can you please tell me one thing? Why was the first post mortem botched up? I mean, we do not need Sherlock Holmes to tell us that Scarlett Keeling was raped. And number two, most importantly, where were the law keepers when the drugs were being peddled? Emotion is good, mister...but reality is better.</p>

The cops did try to cover it up .. . why you ask , we don&#39;t know though we hope to find out what happened , as of now we know for fact in Goa that she didn&#39;t drown as there was not enough water in her lungs and there was DRY sand in her mouth which rules out the possibility of her being drowned , like i said in an attempt to crack the case the cops will prosecute the easiest available target .. . . hurting Goa&#39;s image ?? are you insane ? just look at the headlines around the UK , GOA and the world .. . the story is even on CNN in the state .. . . we are glad that this season is coming to an end and hopefully by next season it subsides , our image is taken a beating just look at the coverage on NDTV , we need to give them an Emmy award for best on screen editing .. . . where are the law keepers ?? these are the same law keepers that you talk of that took out revenge on a former minister of parliament , the same law keepers who are headed by IAS officers from out of state .. . Nelson Albuquerque handling of the case is a shame .. . . practicality is better but practicality with out emotion is a lack of humanity .. . . the truth these days in journalism is so overrated with more of an emphasis of trying to sell the story , you like the rest are a sell out at our state&#39;s expense

<p>Your point on fact 1 is valid. She was on drugs and alcohol and that does not give anyone the right to rape and kill her. Even though she was going against the laws of the land there is no reason for her to be tortured in such a way. People on drugs don&#39;t deserve to die and they don&#39;t deserve to be treated like this. The media loves to spin police investigations in other countries by blaming everything on police foul ups. They&#39;ve been doing it for years with the Natalie Halloway case. As soon as young girls and drugs come into the picture the media goes into a frenzy. The fact that her parents weren&#39;t around to keep an eye on their 15 year old daughter is sickening, although I can&#39;t say in either direction if this tragedy could have been avoided had they been around. Those who are responsible should be punished but the police should also be given ample time to solve the case without it turning into a media frenzy of fault finding and finger pointing. Yes, she should not have been taking drugs but that does not ever give anyone the right to do what they did to her.</p><p>&nbsp;</p><table border="0" cellspacing="0" cellpadding="0" width="161" height="20" style="border-collapse: collapse"><tbody><tr height="20" style="height: 15pt"> <td class="xl65" width="111" height="20" style="height: 15pt; width: 83pt"><a href="http://www.drugrehab.net/"><br /></a></td> </tr></tbody></table>

It is interesting what we hear and the things that we believe compared to what actually happens. It is an outrage that this young woman was not only murdered but left alone in a place that she was not familiar with and with a stranger. I think that from now on parents need to be more aware of their children, especially when they are on holiday when the risk of losing them is more likely to happen.