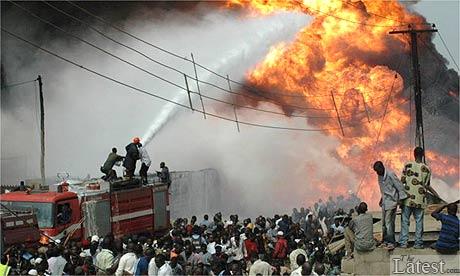 More than 100 people are feared dead after a construction vehicle accidentally ripped open an oil pipeline and triggered a huge explosion in Nigeria's largest city.

Children fled from their schools as oil began spewing from the ruptured pipe just moments before the blast shook the outskirts of Lagos.

"Many children have died," said Witness Aderemi Salau. "In fact you cannot even count them. Some of them were choked by the smoke, others crushed by the concrete fence of the school while some were suffocated in an attempt to rush out. I helped carry ten dead bodies."

Some children were killed in the crush to escape the oil but the Red Cross said it was unclear how many youngsters were among the dead, which it estimated numbered at least 100.

Onlookers gathered at the scene as firefighters struggled to contain the flames, which could be seen for miles around. Pipeline fires are relatively common in Nigeria, the largest crude oil exporter in Africa.

More than 400 people died in two similar explosions in Lagos in 2006 and at least 40 died last December. One of the worst tragedies happened in 1998 in southern Nigeria when 1,500 died in a massive blast.

The authorities often blame the disasters on criminal gangs that tap into pipelines to siphon fuel for sale. After the gangs move on, people trying to scavenge for fuel can cause a spark that sets leaked fuel ablaze.

Catholics Ponder The Unthinkable In Fight Against Virus