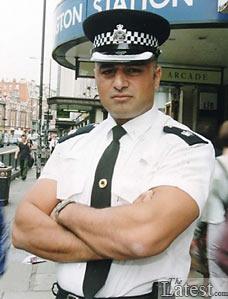 Twice suspended British police commander Ali Dizaei says "certain high-ranking officers" in London are trying to frame him. "This time they are using a complaint by an Iraqi asylum-seeker to accuse me of misconduct," Iranian-born Dizaei said in an interview with with the Islamic Republic News Agency.

Last week the capital's Metropolitan Police passed a report on chief superintendent Dizaei to the Crown Prosecution Service, charging him with fabricating evidence in the arrest of Waad Al-Baghdadi outside a restaurant in west London.

"When I arrested the Iraqi man he apologised for his behaviour, but senior Metropolitan police officers convinced him afterwards to launch a complaint against me," said Dizaei.

This is not the first time that the Met has launched an inquiry against the top officer, who is president of the National Black Police Association (NBPA).

In 2003, the Met initiated a probe into allegations surrounding Dizaei after the MI5 security service reportedly told Scotland Yard that it suspected him of spying for Iran. The investigation cost Britain a hefty  £4m.

Dizaei nonetheless returned to the Met as a west London borough commander after being cleared of allegations of drug use, corruption and threatening national security.

"Last time, they launched one of Britain's largest inquiries against me over  £125 (disputed expenses), but in the end they, themselves, were disgraced," explained Dizaei, maintaining that current attempts to discredit him will also fail.

Following his acquittal, Dizaei wrote a book titled Not One of Us, in which he accused the force of a running a campaign of harassment against the NBPA.

Dizaei, was a close adviser to the Met's assistant commissioner, Tarique Ghaffur, Britain's most senior Muslim officer, who was suspended after suing the force for racial discrimination.

Ghaffur withdrew his claim on last Tuesday in exchange for a  £300,000 settlement, which will see him retire from Scotland Yard.

Dizaei said of the affair: "The force should not be trying to settle a racial discrimination claim with money. Such complaints should be investigated to expose and put an end to the existing discrimination."