has become the first country in the world to be placed under investigation by the United Nations for violating the human rights of people with disabilities amid fears that thousands may have died as a consequence of controversial welfare reforms and austerity-driven cuts to benefits and care budgets.

UN inspectors are expected to arrive in the country within days to begin collecting evidence to determine whether the British government has committed "systematic and grave violations" of the Convention on the Rights of Persons with Disabilities (UNCRPD).

The convention, which came into force in 2008, codifies the rights of disabled people to freedom, respect, equality and dignity.

"It is absolutely shameful that we are the first country in the world to be investigated," said Linda Burnip, founder of the campaign group, Disabled People Against Cuts (DPAC), which submitted evidence to the UN over several years to trigger the inquiry.

"The UK was at one stage doing quite well in meeting disabled people's human rights and supporting people living independently, but all of that has been stripped away."

Some pushed skeletons in wheelchairs holding signs reading: "Declared fit for work" - a reference to the government's widely criticised "work capability assessment" scheme, under which hundreds of thousands of people who previously received disability welfare have seen their payments stopped and been told to find jobs.

the fact that these policies have effectively driven massive numbers of disabled people to their deaths. They have either pushed them to suicide or made them so ill when they've been found fit for work, they've actually died within days or weeks," said Burnip. "People are living in fear on a daily basis of either being sanctioned and left with no money, or that their care will suddenly be cut, and they'll be trapped in their homes, and they won't be able to go out and do anything anymore."

"We urgently need an enquiry into the government's back-to-work regime. These disturbing findings cannot be swept under the carpet. The fact that more than 80 people are dying each month shortly after being declared 'fit for work' should concern us all," said Frances O'Grady, the general secretary of the Trades Union Congress.

Critics argue the assessment system, under which recipients of benefits are regularly re-assessed, puts disabled people under "unendurable stress" and discriminates against those with mental health issues and fluctuating conditions.

A coroner's report into the 2013 suicide of a 60-year-old man with a long history of severe depression - brought to public attention last month by the Disability News Service - ruled that being found fit for work had triggered his decision to end his life and advised that changes to the system were necessary to prevent further deaths.

Other reported cases include people declared fit for work after being diagnosed with terminal illnesses or degenerative conditions or while receiving treatment for cancer or other serious health problems.

Others are reported to have starved to death or frozen in their homes after having their benefits stopped.

Paula Peters, a disability rights campaigner diagnosed with rapid cycling bipolar disorder, said she knew of many others who had taken their own lives as a consequence of being found fit for work or losing access to benefits.

She said the stress of the process had affected both her physical and mental health.

"It's had a devastating impact on me. I've lost so many friends to this. They have taken their own lives in awful circumstances. You see every day on social media somebody else has gone. Somebody else has died because of the stress and the fear and the degradation of the process." 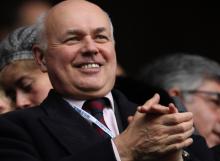 Iain Duncan Smith, the minister responsible for welfare reform since 2010, argues that the government's changes to the system are incentivising work, tackling a deep-rooted culture of benefit dependency, and supporting hundreds of thousands of disabled people in finding jobs.

Addressing the Conservative Party conference last Tuesday, Duncan Smith denounced the "bile and hatred" of protesters gathered outside and said the party's right-wing welfare philosophy was "rooted in human nature, not utopianism nor empty pity".

But his department, which in August was found to have faked case studies of people it claimed to have helped back into work, has faced sustained criticism over the impact of cuts and reforms on the most weak and vulnerable, and alleged mismanagement of the process.

A study by the Centre for Welfare Reform in 2013 found that disabled people had been affected nine times more on average by austerity cuts, while severely disabled people were 19 times worse off.

One important scheme, the Independent Living Fund, which funded full-time care for thousands of severely disabled people, was shut down earlier this year with the government passing responsibility for care provision onto local councils – who are themselves facing severe budget cuts.

In one case, a woman whose round-the-clock support had previously been paid for by the fund was, instead, offered adult nappies by her local council to "increase her independence" in lieu of full-time care.

A Department of Work and Pensions spokesperson in a statement said the government continued to spend £76bn a year in support of disabled people and said a £121bn "welfare safety net" was still available to millions of people in need.

"We strongly reject the allegations made by DPAC. The UK has a proud record of furthering the rights of disabled people, with the principles of the UN Convention at the heart of its approach. People are getting more tailored support to return to work instead of being written off on long-term sickness benefits as happened too often in the past."

But with further rounds of welfare cuts scheduled in 2017, Paula Peters said she believes disabled people fighting for their lives have been left with no choice other than direct action.

In June, DPAC activists, including some in wheelchairs, clashed with police in parliament as they attempted to force their way into the House of Commons. Several were also arrested in July during a protest against austerity in central London.

"I've faced police on horseback in riot gear, but when you've got nothing left to lose and they've taken everything from you, then the fear goes away," said Peters.

"Our attitude is that we are entitled to raise our voices in anger. It helps you cope by helping others and giving others the information they desperately need. And it is also to give other people hope that disabled people are fighting back and empowering them to get involved and raise their voices."