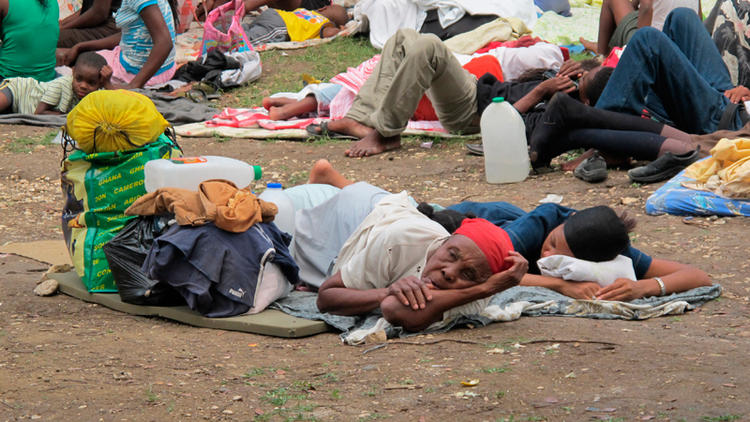 Despite receiving billions of dollars in aid which was supposed to go to the Haitian people, hundreds of thousands of them are still homeless. They live in shanty tent camps as the effects from the earthquake of January 12, 2010 remain.

The earthquake devastated Haiti in January 2010 killing, according to Oxfam International, 250,000 people and injuring another 300,000. 360,000 Haitians are still displaced and living hand to mouth in 496 tent camps across the country according to the International Organization of Migration. Most eat only one meal a day.

Cholera followed the earthquake. Now widely blamed on poor sanitation by United Nation (UN) troops, it has claimed 7,750 lives and sickened over a half a million. The Institute for Justice and Democracy in Haiti and their Haitian partner Bureau des Avocats Internationaux have filed legal claims against the UN on behalf of thousands of cholera victims. Recently the Haitian government likewise demanded over $2 billion from the international community to address the scourge of cholera.

“360,000 Haitians are still displaced and living hand to mouth in 496 tent camps across the country.” 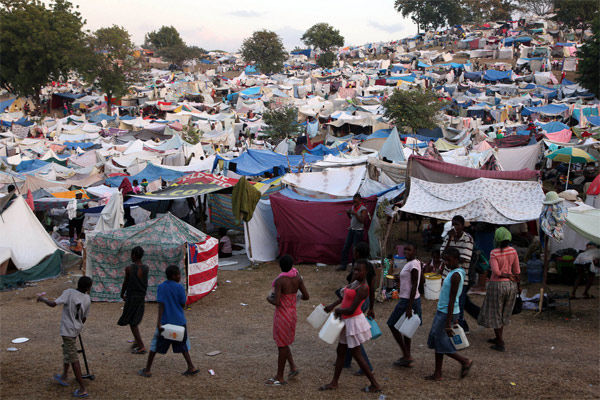 Despite an outpouring of global compassion, some estimate as high as $3 billion in individual donations and another $6 billion in governmental assistance, too little has changed. Part of the problem is that the international community and non-government organisations (Haiti has sometimes been called the Republic of NGOs) has bypassed Haitian non-governmental agencies and the Haitian government itself. The Centre for Global Development analysis of where they money went concluded that overall less than 10 percent  went to the government of Haiti and less than 1 percent went to Haitian organisations and businesses. A full one-third of the humanitarian funding for Haiti was actually returned to donor countries to reimburse them for their own civil and military work in the country and the majority of the rest went to international NGOs and private contractors.

With hundreds of thousands of people still displaced, the international community has built less than 5000 new homes. Despite the fact that crime and murder are low in Haiti (Haiti had a murder rate of 6.9 of every hundred thousand, while New Orleans has a rate of 58), huge amounts of money are spent on a UN force which many Haitians do not want. The annual budget of the United Nations “peacekeeping” mission, MINUSTAH for 2012-2013 or $644 million would pay for the construction of more than 58,000 homes at $11,000 per home.

There are many stories of projects hatched by big names in the international community into which millions of donated dollars were poured only to be abandoned because the result was of no use to the Haitian people. For example, internationals created a model housing community in Zoranje. A two million dollar project built 60 houses which now sit abandoned according to Haiti Grassroots Watch.

Deborah Sontag in the New York Times tells the stories of many other bungles in a critical article which reported only a very small percentage of the funds have been focused on creating permanent housing for the hundreds of thousands displaced. Many expect 200,000 will be still in displacement camps a year from now.

The majority of the hundreds of thousands of people still displaced by the earthquake have no other housing options. Those who were renters cannot find places to stay because there is a dramatic shortage of rental housing. Many of those who owned homes before the earthquake have been forced to move back into their dwellings despite the fact that these homes are unsafe.  A survey by USAID found that housing options are so few that people have moved back into over 50,000 “red” buildings which engineers said should be demolished. 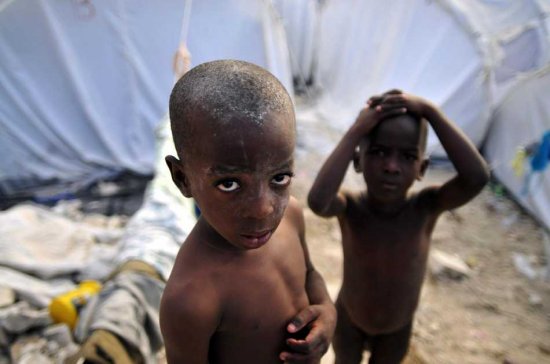 One new program, 16/6, promises to pay a one-time $500 maximum rental subsidy for a family to relocate from tent camps but this program will only benefit a tiny percentage of the displaced population because it is currently available only for about 5% of the people displaced. It is limited to those living in the 6 most visible public camps in Port au Prince. With the housing shortage in Port-au-Prince there are few places available to rent even with a subsidy.

“Many in camps fear leaving their camps to seek work or food worried that their tents and belongings will be destroyed in their absence.”

Most of the people living under tents are on private property and are subjected to official and private violence in forced evictions according to Oxfam. Over 60,000 have been forcibly evicted from over 150 tent camps with little legal protection. Oxfam reports many in camps fear leaving their camps to seek work or food worried that their tents and belongings will be destroyed in their absence.

Dozens of Haitian human rights organisations and international allies are organising against forced evictions in a campaign called Under Tents Haiti.

The fact that these problems remain despite billions in aid is mostly the result of the failure of the international community to connect with Haitian civil society and to work with the Haitian government. Certainly the Haitian government has demonstrated problems but how can a nation be expected to grow unless it leads its own reconstruction? Likewise, Haitian civil society, its churches, its human rights and community organisations, can be real partners in the rebuilding of the country. But the international community has to take the time to work in a respectful relationship with Haiti. Or else the disasters of the earthquake and hurricanes will keep hammering our sisters and brothers in Haiti, the people in our hemisphere who have already been victimised far too frequently.

Bush is 'divorced from reality'

Thorn in America's Side