So finally, Hissène Habré, the former dictator of Chad, is being tried for crimes against humanity, war crimes and torture during his rule from 1982-1990.

A few news items focused on the scuffles which broke out at the trial last week in Dakar, Senegal – and the adjournment of the case until September. Yet the history of the attempts to bring Habré to justice has gone largely unreported in the Western corporate media.

Formerly part of French Equatorial Africa, Chad gained its independence in 1960 and since then has been gripped by civil war. In a rare instance of coverage on May 21 1992, the London-based Guardian carried four short paragraphs reporting how 40,000 people were estimated to have died in detention or been executed during the tyranny of Habré. A justice ministry report concluded that Habré had committed genocide against the Chadian people.

First, in a case inspired by the one against Chile’s Western-backed dictator General Augusto Pinochet, several 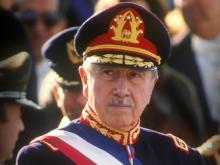 human rights organisations, led by Human Rights Watch, filed a suit against Habré in Senegal (his refuge since 1990). They argued that he could be tried anywhere for crimes against humanity and that former heads of state were not immune. However, on March 21 2001, the Senegal Court of Cassation threw out the case. And so human rights campaigners turned their attention to Belgium where one of the victims of Habré’s torture lived.

Following threats from the United States in June 2003 that Belgium risked losing its status as host to Nato’s headquarters, a historic law of 1993, which allowed victims to file complaints in Belgium for atrocities committed abroad, was repealed. A new law, adopted in August 2003, allowed for the continuation of the case against Habré – much to the delight of human rights campaigners. But then attention switched back to Senegal. Here, under pressure from the International Court of Justice and victim campaign groups, a special tribunal was set up to investigate the allegations – the Extraordinary African Chambers. Finally, in February 2015, a panel of four judges announced there was enough evidence to put the former dictator on trial after carrying out a 19-month pre-trial investigation, mainly in Chad, interviewing 2,500 witnesses and victims, analysing documents from Habré’s secret police and visiting mass graves.

While coverage of Chad has been largely missing from the Western media, so too was the massive, secret war waged by the United States and Britain from bases in Chad against Libyan leader Colonel Mu’ammar Gaddafi. British involvement in a 1996 plot to assassinate Gaddafi was reported as an isolated event – following revelations by ex-UK spy David Shayler. Yet it is best seen as part of a wide-ranging and long-standing strategy of the US, French and UK secret states to remove Gaddafi which culminated in his brutal ousting during the Nato-led uprising in 2011.

Grabbing power by removing King Idris in a 1969 coup, Gaddafi (who, intriguingly, had followed a military training course in England in 1966) soon became the target of covert operations – many of them launched from Chad – by the French, Americans, Israelis and British.

Stephen Dorril, in his seminal history of M16, records how in 1971 a British plan to invade Libya, release political prisoners and restore the monarchy ended in an embarrassing flop. Nine years later, the head of the French secret service, Alain de Gaigneronde de Marolles, resigned after a French-led plan ended in disaster when a rebellion by Libyan troops in Tobruk was quickly suppressed.

Then, in 1982, away from the glare of the media, Habré, with the backing of the CIA and French troops, overthrew the Chadian government of Goukouni Wedeye. Bob Woodward (of Watergate fame), in his semi-official history of the CIA, reveals that the Chad covert operation was the first undertaken by the new CIA chief William Casey and that, throughout the decade, Libya ranked as high as the Soviet Union as the bête noir of the White House. A report from Amnesty International (AI), Chad: The Habré Legacy, of October 2001, recorded massive military and financial support for the dictator by the US Congress. It added: “None of the documents presented to Congress and consulted by AI covering the period 1984 to 1989 make any reference to human rights violations.”

US official records indicate that funds for the Chad-based covert war against Libya also came from Saudi Arabia, Egypt, Morocco, Israel and Iraq. The Saudis, for instance, gave $7million to an opposition group, the National Front for the Salvation of Libya (also backed by French intelligence and the CIA). However, a plan to assassinate Gaddafi and seize power on May 8 1984 was crushed. In the following year, the US asked Egypt to invade Libya and overthrow Gaddafi but President Mubarak refused. By the end of 1985, the Washington Post had exposed the plan after congressional leaders opposing it wrote in protest to President Reagan.

Frustrated in its covert attempts to topple Gaddafi, the US government’s strategy suddenly shifted. For 11 minutes in the early morning of April 14 1986, 30 US air force and navy bombers struck Tripoli and Benghazi in a raid code-named El Dorado Canyon.

The US and UK mainstream media were ecstatic. Yet the main purpose of the raid was to kill the Libyan president – dubbed a “mad dog” by Reagan. In the event, the first bomb to drop on Tripoli hit Gaddafi’s home killing Hana, his adopted daughter aged 15 months – while his eight other children and wife Safiya were all put in hospital, some with serious injuries. The president escaped.

Reports of US military action against Libya disappeared from the media after the 1986 attack. But away from the glare of publicity, the CIA launched its most extensive effort yet to spark an anti-Gaddafi coup. A secret army was recruited from among the many Libyans captured in border battles with Chad during the 1980s. And as concerns grew in M16 that Gaddafi was aiming to develop chemical weapons, Britain funded various opposition groups in Libya.

Then in 1990, with the crisis in the Gulf developing, French troops helped oust Habré in a secret operation and install Idriss Déby as the new President of Chad. The French government had tired of Habré’s genocidal policies while George Bush senior’s administration decided not to frustrate France in exchange for co-operation in its attack on Iraq.

Yet, even under Déby, abuses of civil rights by government forces have continued. As Amnesty International’s latest report on Chad comments: “Serious human rights violations continued to take place with almost total impunity. The rights to freedom of expression and to peaceful assembly were frequently violated. Human rights defenders, journalists and trade unionists were victims of harassment, intimidation, arbitrary arrest and detention. People, including protesters, were killed by members of the security services during demonstrations.”

Amnesty, in fact, argues that Déby should also be on trial in Dakar. It commented: “Chad’s current president has not been indicted by the Extraordinary African Chambers, but served as Chief of Staff of the army under Habré’s administration. Research undertaken by Amnesty International suggests that troops under his command may have committed mass killings in southern Chad in 1984.”

Chad is currently a key country in US plans for covert military intervention in North Africa. Earlier this year, in March, Chadian forces, including the Special Anti-Terrorist Group (SATG) which has received extensive training and equipment from the US military, invaded northern Nigeria and seized the towns of Malam Fatouri and Damasak, according to an Associated Press report. The Déby regime plays a major role in the US-funded Trans-Saharan Counterterrorism Partnership and is helping to coordinate the African Union (AU) multi-national force of some 8,700 troops called for by the AU in January.

Chadian troops fought alongside Western forces during the 2013 French-led invasion of Mali, and the Chadian government has since approved the permanent stationing of thousands of French troops in its capital, N’Djamena.

* Richard Lance Keeble is Professor of Journalism at Lincoln University. He has written and edited 30 books including Secret State, Silent Press (John Libbey; 1997), a study of the US/UK press coverage of the 1991 Gulf conflict.

Heads held in shame: Rape, masculinity and the media