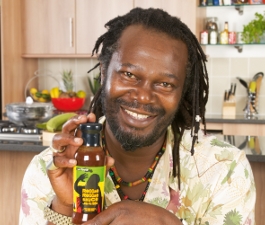 TV chef Levi Roots is being stalked in Fleet Street by a kiss and tell story from a scorned lover that threatens to bring down his multi-million pound empire in Britain.

The 51-year-old Jamaican born entrepreneur, who started his career as a minor music artist, hit the big time with his "Reggae Reggae Sauce". He now has a BBC TV show a best-selling book and boasts that he is worth £18m. Keith Valentine Graham, who was born in Content, Jamaica, in 1958, is better known as Levi Roots.

He is a Brixton, south London-based reggae musician, chef and entrepreneur who has performed with soul legend James Brown and Maxi Priest. He was nominated for a prestigious MOBO music award in 1998.

But the meteoric success of the the father of seven, who does not hide the fact that he has been to jail, is threatened by a woman whose explosive allegations about him, include that:

Roots was a friend of reggae super star Bob Marley when he lived in the UK and performed Happy Birthday Mr President for Nelson Mandela in 1992 on his trip to Brixton. He gained widespread fame after appearing on the UK television programme  Dragons' Den looking for funding for his  "Reggae Sauce".

He told The-Latest: "I have nothing to hide. I'm single but I have seven children by six different women and I have been to jail. That is part of my story. I have turned my life around. If someone wants to try to bring me down I don't see why I should have to defend myself when everything is in the open."

The-Latest understands that a red top daily and a top selling Sunday newspaper are in talks with a recent lover of Roots's, an attractive younger woman who is of Ghanaian descent. She has been hawking around her story about their ill-fated affair in an attempt to sell it to the highest bidder. She says her sole motive is to recoup the cash she claims he owes her for work as his PA when she helped build up his success. The struggling single mum, who asked The-Latest not to name her, says she's pleaded with him to pay up and has even taken legal advice, but can't afford to sue him. She says Roots has refused to settle and going to the press is her last resort.

Roots and his children have been selling and marketing the sauce at the annual Notting Hill Carnival since 1991. In 2006, it was available for sale at the one million-strong street festival, with 4,000 bottles sold.

He later took the sauce to a food trade show, where he was spotted by a BBC producer who approached him to appear on Dragons' Den. Roots was on the first episode of the fourth series where he offered a 20 per cent stake in his business for £50,000. Despite dishonestly claiming that he had an order for 2.5 million litres of the sauce (when in fact it was for 2,500 kilograms), Roots was offered the money for a 40 per cent share of his business by Peter Jones and Richard Farleigh (Farleigh later said that he was impressed by how he was able to recompose himself when the lie in his pitch was exposed).

Leading on from the success of his spicy bottled product, Levi released an extended version of his song Reggae reggae sauce which features one of his children, Joanne, on backing vocals. The music video features a cameo from dragon Peter Jones. Roots claimed all of the money raised went to the Comic Relief charity.

Shortly after his appearance on the programme, chain store Sainsbury announced that they would be stocking the sauce in 600 of their stores. The song, which formed part of his pitch on Dragons' Den (and also sung by Roots himself in an appearance on Harry Hill's TV Burp), was also released as a download single. Proper Tings (The Reggae Reggae Sauce Song) received its first play on Allan Lake's breakfast show on Core radio station.

To coincide with the release of his recipe book Reggae Reggae Cookbook, Roots appeared on the June 3 2008 edition of BBC's Ready Steady Cook as a celebrity. He was second placed on the show behind Lesley Waters.

High Street sandwich chain Subway began selling Reggae Reggae Chicken Sub in its UK outlets, having signed a deal with Roots, enabling it to use his brand in its sandwiches. Both the Scream and the Wetherspoons pub chains have also begun to include, on their main menu, several items using the sauce.

The book shop chains Waterstones, Borders and WH Smith have been heavily promoting his new book, Caribbean cooking made easy. Roots has a popular restaurant, the Patine and Jerk Centre in Lavender Road, Battersea, south London, close to where fellow celebrity chef Gordon Ramsey lives. He holds court on Sunday afternoons with his adoring yuppie clientele.

But, while Roots is popular among trendy white people, his own Caribbean community have raised concerns that he has cynically cashed in on the keenness of influential media folk to demonstrate that they are down with Black culture and that he is no more than a "token".

Any highly publicised scandal involving Roots could jeopardise his lucrative TV, book and other commercial deals.

<p>I can just see the headlines - Jerked by saucey reggae chef.&nbsp; I guess she wants to get money she feels is due to her by any means necessary.</p>