Statesman blames US for Gaza war 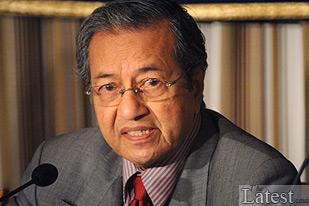 Malaysia's former prime minister has blamed America for backing Israeli military aggression against Palestinians in Gaza, saying it makes the US "much more guilty than even the Israelis".

Mahathir Mohamad, long known for his anti-West views, on Monday said that no matter how clever or powerful Israel was it would not be able to carry out the offensive without US support.

"The backing by the US gives it encouragement to do all these things which I think ordinary Americans would not like to see them do," Mahathir said in an interview with Al Jazeera.

"Israelis believe it they go to war there is this big brother that is going to come with the weapons, with the money, so they don't care what the world thinks."

He also suggested a boycott of the American dollar as a way to pressure the country's leadership, saying that if the US is impoverished "it cannot undertake all these aggressive acts".

Mahathir, the country's longest-serving prime minister for 22 years before he stepped down in late 2003, also defended the Palestinians' right to retaliate against the Israeli blockade of Gaza.

Meanwhile Malaysia is leading the Organisation of Islamic Conference (OIC) in a bid to seek a special session at the UN General Assembly to stop the escalating violence in Gaza.

Abdullah Ahmad Badawi, the Malaysian prime minister, said the Malaysian permanent envoy to the UN will discuss with officials from the 57-member OIC on how best to push for such a session.

"I hope the United States and its allies will not impede efforts to convene the special general assembly," the Bernama national news agency quoted him as saying.

In a separate statement, Abdullah urged the international community not to tolerate Israel's ground offensive which he described as "an act of total war".

The US late on Saturday blocked approval of a UN Security Council statement that called for an immediate ceasefire between Israel and Hamas, and expressed serious concern at the escalation of violence, according to council diplomats.

Israel sent troops and tanks into Gaza on Saturday after a week-long aerial bombardment which has left more than 500 Palestinians dead and thousands more wounded so far.

Outspoken young woman who has solutions for Africa