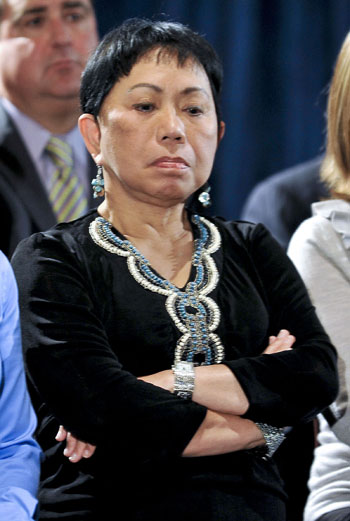 Kutilda Woods has had enough. Speaking to reporters shortly after Tiger's public statement, she criticised the way her son has been treated since his Thanksgiving crash and after the ensuing infidelity revelations.

"He didn't kill anybody, he didn’t do anything illegal. They've been carrying on from Thanksgiving until now, that’s not right," she said.

"I am upset the way media treated him like he's a criminal."

Kutilda, who gave Tiger a hug and some words of encouragement following his remarks, confirmed that he has been working on strengthening his spiritual life.

"Buddhism teaches you to go deep inside your soul and look through from himself, and correct the bad thing to be a good thing," she said. "When he realised, he said okay, and went back to practice Buddhism and that will make him a much better person."

Saying Tiger has a "very good heart and soul," Kutilda believes there is a "double standard" in regards to her famous offspring.