A mostly smooth evacuation from Hurricane Gustav turned sour on Tuesday as many New Orleans residents trying to return home were turned away at roadblocks into the city or stranded in parking lots across the region.

Mayor C. Ray Nagin said Tuesday night that most residents would have to wait until just after midnight on Thursday morning to return, because power and medical care were not back to normal. A curfew will remain in effect at night.

The delay in returning left many sweltering and frustrated at the city's edges, out of gas, money and food after several days on the run. A dozen or so people waited it out in the parking lot of a closed Circle K gas station in LaPlace, 30 miles from New Orleans, and dozens of others were in the same situation across Lake Pontchartrain, in St. Tammany Parish, according to officials and local radio reports.

Many of those who could not get in said that a house without power, awaiting them in the city, was preferable to another night sleeping in a car in a hot parking lot.

"They should let people back in, the storm is over with," said Dominique Jones, a landscaper from east New Orleans who was leaning, shirtless in the broiling heat, against his truck, while his wife, Kim, a security guard, sat inside. "We might not have lights, but we can light candles. We have canned goods. We don't have anything out here. We're dead broke." 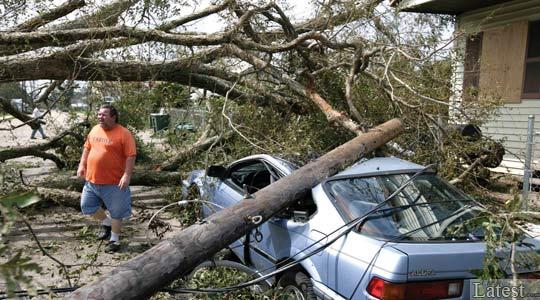 New Orleans was spared on Monday by Hurricane Gustav, which knocked out power and downed trees and their limbs but otherwise left buildings intact, the sewer system largely functioning and hospital emergency rooms open. The storm did not bring any serious flooding.

On Tuesday, power remained off at nearly 80,000 homes in New Orleans and tree limbs littered the streets. City officials listed these and other factors as reasons that they were not ready for the return of hundreds of thousands of residents who heeded the mayor's mandatory evacuation call over the weekend.

Although Thursday will be the return date for most residents, business owners will be allowed in today. Several other nearby parishes planned to allow residents back on Wednesday.

Thursday seemed unthinkably distant for those who disregarded the official warning not to return and tried unsuccessfully to make it through the barriers at the entrances to the city.

"What are they going to do about people that get stuck out on the side of the road without money or gas?" asked Raymond Taylor, a taxi driver from the Gentilly neighborhood, sitting in his cab.

Merlene Demourelle, a Mid-City resident, dismissed the inconveniences that awaited her at home.

"We're tired, we're hungry, we're out of money, and we want to take a bath," she said. "Sleeping in darkness  — we're used to that in New Orleans. Our lights always go off."

Demourelle and three traveling companions from the city told of the hostility they encountered upstate and of being turned away from shelters in towns like Alexandria, Bunkie and Livonia.

"We slept in the parking lot during the hurricane," she said of a church in Alexandria.

Her husband, Ronald, added, "We told them we was from New Orleans, and they wouldn't take us."

New Orleans, meanwhile, remained mostly deserted on Tuesday, with the occasional resident who ignored the evacuation order sweeping up outside. There was scant evidence of the cleanup promised by officials, with a carpeting of tree limbs, fallen magnolias and fractured crepe myrtles on the streets.

Only 10 deaths have been attributed to the storm so far, six of them occurring during the evacuation  — far lower than the 1,600 killed in Hurricane Katrina three years ago. Still, Jindal said Hurricane Gustav was "a very, very serious storm that has caused major damage in our state."

But the storm was also a major  — and ultimately successful  — test of the flood protection system that failed so disastrously during Hurricane Katrina. Monday night saw the debut of critical gates and pumps at the city's drainage canals, and they worked.

The 17th Street Canal gates were closed just after 8 p.m., the pumps were fired up, and the water level in the canal dropped three feet in the first hour. There was no powerful storm surge into the canal, which runs deep into the city and caused 80 percent of the flooding in the city after Hurricane Katrina.

"There should be no doubt in anybody's mind" after the first true test of the pumps, said Colonel Jeffrey Bedey of the Army Corps of Engineers, that "they worked pretty much as planned and designed."

Nagin voiced the general feeling that the city had escaped another catastrophe. "We dodged a bullet," he said on the "Today" show on Tuesday morning. "So we're feeling pretty decent right now."

Critics in New Orleans say Nagin exaggerated the threat from the hurricane  — which ultimately blew no more than tropical-storm-force winds at the city  — when he called it "the mother of all storms" on Saturday.

"I'd probably call Gustav the mother-in-law, the ugly sister, but other than that I'd do the same thing," Nagin said on Monday evening.

In Houma, which is southwest of New Orleans and fell directly in the path of Hurricane Gustav, there was a very different picture on Tuesday. Enormous downed trees, snapped power lines and splintered telephone polls blocked streets in the largely deserted town of about 32,000. Mangled pieces of metal dotted the roads. Gas station awnings were toppled, as were traffic signals, billboards and marquees.

Residents of New Orleans, though, seemed eager to return home and get back to fixing up the city.

"They evacuated us all right," said Angelus Mitchell, an Eighth Ward resident who works in construction, sitting on a camping chair in the parking lot here. "But they didn't have this part thought through."

Mitchell had evacuated to Baton Rouge, but he said he was not going to return to that city.

"This don't make no sense," he repeated three times. "They've got us blocked away from our home, man."

US lies, half truths and failures in Afghanistan