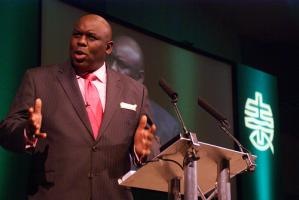 What links a keen student of world economy, a careers advisor for Black beauty, and a candidate for a Conservative Party seat in the UK parliament? They are Black and proud and raised some high-ambition goals at Rev David Shosanya’s State of Black Britain symposium.

“Youth must globalise their knowledge,” Adam Cooper told the 200 delegates, families and children. Cooper, a scholar in Asian and African Studies, edits Ceasefire, the journal of student and academic activists in the peace movement.

“Raise your political game”, said Hammersmith Conservative candidate Shaun Bailey, pictured left. Born in a deprived inner London housing estate, his charity, My Generation, rescues troubled and crime-prone youth in the badlands of inner cities. Definitely not in the mould of his New Labour voting audience, “he is a Tory - and an increasingly influential rising star,” say party leaders.

These talent-led, “next generation” proposals herald major changes in knowledge, life styles and political action. Why? “Because the state of Black Britain is in deep crisis,” Rev Shosanya acknowledges.

Whatever area of life Black people find themselves in - from deprived neighbourhoods to Her Majesty’s prisons and to college, high-flying IT jobs and leafy suburbs - they are confronted by severe and unfair exclusions that  inevitably damage personal, family and community life.  “It’s time for change; time to say ‘Yes, we can!’ ” says the devout Black Christian church leader, echoing the campaigning motto of US President Barack Obama.

Rev Shosanya clearly favours up-close, bonding and nurturing Black  communities. However, the founder’s vision may prove to be overly Christian, evangelical, bible-based and too God-obsessed for many in Britain's diverse Black communities. Not all of Britain’s one million people of African and Afro- Caribbean heritage, colours and faiths can be expected to tread a single path to progress.

Contenders in the movement towards renewing Black Britain have their own views and spheres of influence.  They range from ministers  of the Black Muslims and the Nation of Islam,  disillusioned marxists and Labour stalwarts to Obama-ists,  integrationists, mixed-race rights campaigners, Rastafarians and cultural nationalists to strivers, hustlers and "the brothers and sisters who just don’t give a damn".

New talents have placed new thoughts for action on the Black Agenda. The symposium marked the first popular 21st century debate on Black life and political progress or failure. Constant dialogue about accelerating change over stagnant survival will fuel fierce debates on birthing a new generation in the State of Black Britain.

* In this third part of a Black History Month 2009 series on Unshackling the Afro-British Mind, the author Thomas L Blair © looks at how Black people in Britain are bedevilled with problems and why talented youth could have the radical answers needed. He is a well-known academic and independent political commentator on Black urban affairs. Details of his book The Audacity of Cyberspace -The struggle for Internet power is highly recommended by The-Latest.com

Snowfall in Britain - why the panic?