Tears of joy and sorrow in the frozen north 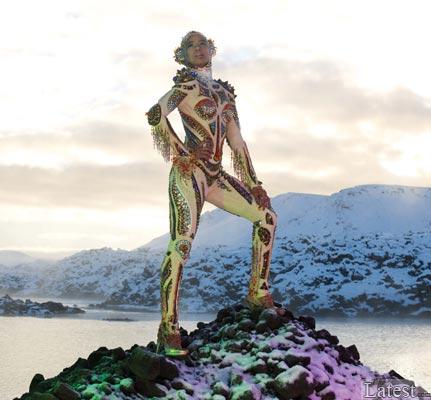 None of us was expecting to be leaving the country so early in the competition. But I guess it just proves that you never know what is going to happen next on this programme. Arriving back from judging we were surprised by an ice sculpture with a "Lisa Mail" inside that directed us to our bedrooms where we found suitcases with a set of gloves and a woolly hat.

Ok, so there was no chance we were going anywhere tropical, but what icy location would we be visiting? We all hoped that we would be going to Iceland as we knew that this was one of the judges Huggy's homeland, but at the same time this is Tv so they could be taking us down the freezer isle at Tescos for all we knew. Luckily the next morning we arrived at an airport and there was a mystery person behind a flag. It was Huggy and of course we were going to Iceland.

It was our first day in cold Scandinavian country and we were thrown straight into a casting for a commercial to promote the place. To our horror we had to deliver lines in English and Icelandic and eat svid, an Icelandic delicacy made from sheep heads. Yeah you heard me, we had to eat sheep heads and make it look like it's the best thing we've ever tasted.

It was a bit of a challenge and I totally cringed watching the commercial back, but the svid actually wasn't as bad a some of the girls made it look. It was kind of like swidgy pÃ¢tÃ©. Not the best thing I've ever tasted, but I didn't believe there was any need to make such a fuss. I think the hardest thing was trying to get the Icelandic lines out.

The next day we were up at the crack of dawn for a photo shoot with Huggy; the theme being the nine Nordic queens. It was an amazing location. Here we were at the famous Blue Lagoon, which apparently is the most photographed place in the world. The view was breath-taking with the hot volcanic springs punctuating a snowy landscape. But it was no time to get distracted by the nordic scenic beauty. I had to focus on the task at hand.

I was the queen of rocks and stones and my outfit surely reflected the theme. I was wearing an elaborate catsuit that was encrusted with jewels. It was so heavy, it took five people to pull it up on me. I could really feel the pressure. I was the only girl not wearing a dress and I felt this outfit was so hard to pull off; but being me I was going to give it a good old try.

The Iceland photo shoot was definitely the coldest I have ever been on in my life. I had to climb up a mound of volcanic rocks in five inch heels and just make the shoot work. It had been a long day, so we all really needed a cocktail. But you know, alcohol can be dangerous around a group of female in a situation like this. It all started off well. We thought we would tell each other what we thought when we first met, but obviously some people couldn't really take the brutal honesty of some of the girls and the situation became heated, resulting in Viola storming out of the room in tears.

Believe it or not, I don't think anyone was trying to be nasty, we just wanted to get things off out chest. After our evening of heated conversation we were told the news that again one of us would be leaving the competition the following day. I had almost totally forgotten about elimination with the excitement of Iceland. I hoped I had done enough to stay in the competition.

Elimination again and I must say that I wasn't too pleased with my photo. It wasn't horrific. Unfortunately it just didn't hit me as being amazing and, from the reaction of the judges, they agreed with me. I had a feeling I was going to be in the bottom two, but not with Maddie one of my best friends in the house. This made me feel physically sick. I knew how much Maddie wanted this, but I couldn't ignore the fact how much I knew I wanted it too.

It felt like forever waiting for presenter Lisa Snowdon to read the name of the girl who would be staying.  "Annaliese", Lisa said my name and I was so thankful, but also so upset for Maddie, who was like my rock in the house. Maddie left the stage and I was like a big baby because I couldn't stop crying. I had to remind myself that she was not dying and I would see her in a few weeks time. All I can say is that I really hope I don't have to be in the bottom two again.

To find out tune in to Living TV Mondays at 9pm.