'Tension here was palpable after the bloody mutiny'

The streets have been unusually quiet over the last few days as Bangladesh's capital saw the greatest disturbances in decades when the border guards mutinied.

The elections, by and large considered free and fair, took place after a two-year interim government lead by the military.

It began on Wednesday and virtually shut down Dhaka in the 35-hour siege that took place at the headquarters of the paramilitaries in the centre of the city. The BDR, as the Rifles are known,   took 100 people hostage, killed their commanding officer who headed the 67,000 strong force,   as well as several passers-by. The exact death toll is not yet known but it is estimated to be more than 130 people.   A series of mass graves had been found by Saturday bringing the official death toll to 78.

The stand-off which had been building up, is ostensibly over pay, but in a desperately poor and undeveloped country like Bangladesh, with a history or coups and counter-coups, the story is inevitably more complex.   During the 1991-1996 Bangladesh Nationalist Party (BNP) government the lower tier of the BDR had staged mutinies across the country expressing similar grievances.

The siege turned the expensive neighbourhood into a battle-ground.   Phone networks were shut down, garment workers were sent home, schools were closed, as was a hospital nearby and the government threatened a curfew.

It began at the BDR's annual assembly at Darbal   Hall where soldiers aired their grievances against the army. The BDR comes under the purview of the Army, who they accuse of corruption . They also demanded better facilities.

The prime minister, Sheikh Hasina (pictured left) had addressed the soldiers only the day before. One disgruntled rebel asked why the officers had not raised their grievances with the prime minister when they had met. He was apparently shot by the officer, which sparked the revolt.

Later on Wednesday, hours after the first shots were fired, Sheikh Hasina offered amnesty to the rebels and tough action if they did not surrender. She told   them to stop their 'suicidal activities'. Some of the troops began to surrender, but the next day, on Thursday, the rebellion erupted across the country spreading to 12 separate areas around the country's international borders with Myanmar and India.

Despite the continuing dispute, one American eye-witness, who lives in the area, watched the tanks roll   in surrounding the guards' barracks and heard shots being fired   as the government announced the situation was under control making it difficult for anyone to have a sense of what was actually going on. For a time the tension in Dhaka was palpable. People were told not to go out, but in the diplomatic area, where many of the embassies are located and where many foreigners live, life went on with relative normality.

In one of the city's many slums waves of garment workers (pictured right), literally paid pennies a day to make the cheap clothing that supply international chains, left work early to return to their   homes. Floods of young women streamed into the slums, dressed in their brightly coloured saris and shalwar kameez, the baggy pants and long shirts that women wear. The tinsel-coloured rickshaws pulled by scrawny men also crowded the roads,

Bangladesh is one of the world's most densely populated and poorest countries and within the next few decades Dhaka could become the largest city in the world, swelling its already huge population of more than 150 million people, 50-60 percent of them under the age of 40. Millions are simply hard-core poor - surviving on little food, little money, and in housing situations that are as desperate as any in the world in decrepit rooms not fit for human habitation. 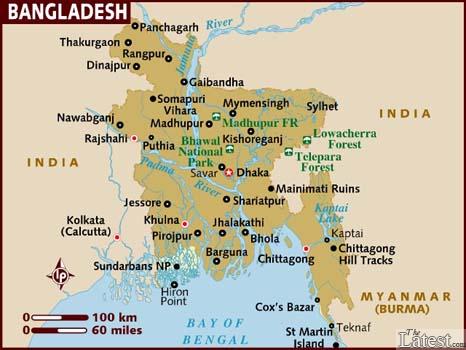 This is the country that spearheaded the idea of micro-finance that was supposed to lift people out of poverty. While the country has a growing middle class the numbers of poor remain staggering, and Bangladesh is still one of the most corrupt countries in the world according to Transparency International.

The mutiny finally came to an end on Thursday night at 8:20pm when the soldiers deposited their arms and ammunition to the armoury, and returned to their barracks.   Sheikh Hasina's has government acted quickly since her Awami   party took power in December to limit the army's role. While she has promised amnesty, 200 BDR soldiers have been arrested, it is speculated that with so many army fatalities they will go for the legal penalty for mutiny - which would be death by hanging, and there will be no pardon. Three days of official mourning have been declared.

* Bangladesh police say they are charging more than 1,000 border guardsmen in connection with a mutiny which left more than 140 people dead. The charges include conspiracy to kill officers and civilians, using weapons and explosives, creating panic, looting and trying to hide bodies. Remains of more than 70 officers have still not yet been found days after the violence in Dhaka.

1 Response to "'Tension here was palpable after the bloody mutiny'"

The shift in media perspective and public opinion is evident everywhere in the sub-continent regarding this revolt. Initially the common people, as well as the media, were sympathetic to the cause of the paramillitary border forces of Bangladesh, who are supposedly treated badly by the &quot;big brother&quot;, the Bangladeshi Army. But from day two, just when the graves were discovered, the perspectives also started to change. Nazneen Shakil Shipu, wife of the deputy inspector general, of the Bangladesh Rifles, was for two days slowly bayoneted to death with the utmost brutality. Her tied up and gagged body was found, draped in a curtain in one of the mass graves of the officers who were killed. Her face was unrecognisable as it had been smashed with stones and rifle butts. This so-called mutiny is thought to be the brain work of the opposition parties, headed by hardliners and the &quot;Jamat-e-islam&quot; who made a scheme of playing on the nerves of the Army to topple the newly-elected democratic government. Thankfully the administration dealt with it in a mature way by controlling the army. Indian border security forces are on high alert, as bids to infiltrate it, with similar horrific consequences, may be afoot.