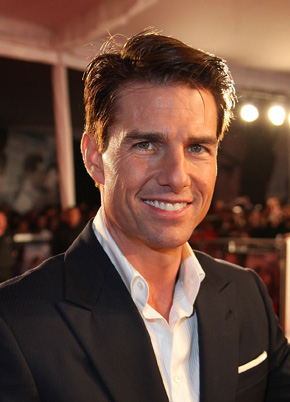 Amy Scobee is a former high-ranking Scientologist. She's about to publish a book about her time with the controversial religious sect, that contains some interesting details about Hollywood actor Tom Cruise.

Scobee, who'd been with the Church since the age of 14 and used to work at the Los Angeles Celebrity Centre, has spoken out before - most recently during Anderson Cooper's CNN Scientology expose. Her book, Scientology: Abuse at the Top, will be published next month.

Tom Cruise's lawyer, Bertram Fields, got wind of it, and on April 6, he sent her a letter warning her about publishing a book that "includes assertions about Mr Cruise that are demonstrably false and defamatory." Former Scientologist Mark "Marty" Rathbun - who was also featured in Cooper's series - posted it to his blog.

So, what are these demonstrably false assertions?

First, that Tom Cruise has a "drug history" and he was worried this would keep him out of Scientology:

Rathbun, who has apparently read Scobee's manuscript, says that Scobee's book recounts a conversation with David Miscavige's wife, where she told Amy that Tom was "so gung-ho" that he wanted to join the Sea Org but he didn't qualify because of his previous drug history. Members of the Sea Org or Sea Organisation are normally found in the central management groups within the Church of Scientology.

Second: That Cruise was "given an ultimatum to choose between Scientology and Nicole Kidman". Fields writes that "Scientology had nothing to do with Mr. Cruise's divorce". But Rathbun says Scobee's book doesn't cover the divorce because she didn't have first-hand information about it. (Although Jason Lee's ex-wife certainly thinks Scientology had something to do with it).

Third: That "a Scientologist handling Mr. Cruise's finances was punished for losing him money". Fields claims that no one who manages Cruise's money is a Scientologist. Rathbun says that in her book, Scobee writes about one Alan Hollander, who was "put in the bilges" of Scientology's nautical-themed "Sea Org" because he "messed up on some investment for TC".

Finally: That Cruise's household staff is selected and paid by Scientology. "This is also false," Fields writes. "Scientology does not select his household staff." Rathbun says that Scobee was involved in a project to "hire Scientologists for TC's household," whose duties included housekeeping and cooking.

Fields concludes by writing “assuming that you publish these libellous assertions, I have urged Mr Cruise not to give your book publicity by filing a lawsuit while it is initially on sale, but to wait until later to file an appropriate action for damages”.

Read the letter here in full and click to enlarge: 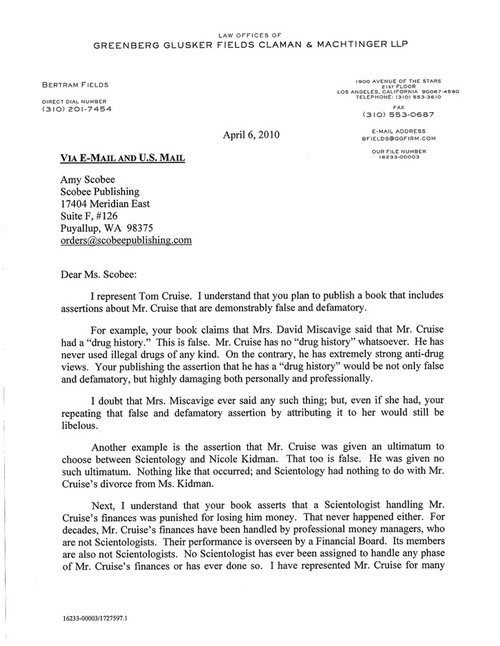 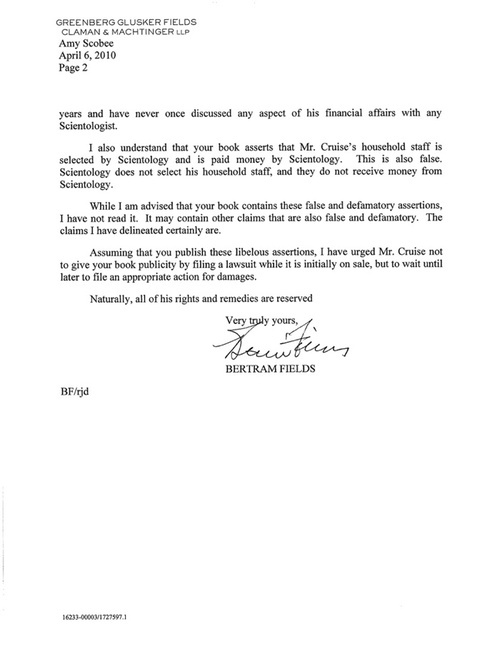