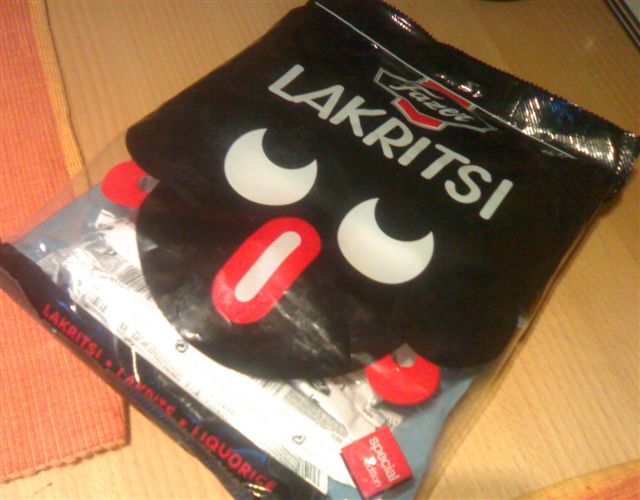 The-Latest has helped win a David and Goliath victory over a giant Scandinavian food manufacturer who for a decade have stubbornly refused to remove a racist logo from one of their most popular products.

Cloetta Fazer have just announced that they are going to get rid of the insulting  'Sambo' image from the wrapping paper of liquorice sticks made by them for more than 80 years. The Finnish company, which is one of the biggest food manufacturers in northern Europe, has faced international criticism from anti-racists including editor of The-Latest. Marc Wadsworth who started the campaign against the offensive image in 1996.

The breakthrough came when the Finnish Ombudsman for Minorities, Mikko Puumalainen, supported Wadsworth's complaint to him last year and referred the case to the country's powerful Consumer Agency. According to the Ombudsman 'the long time use of a certain wrapping paper does not as such make the usage acceptable. Neither does the wish to continue a tradition by using a certain kind of wrapping make the usage of the wrapping in question acceptable in these cases.'

The Ombusman added: "Companies should also promote good ethnic relations in society and the usage of these kinds of wrapping papers does not do that."

Meanwhile, British MEP Claude Moraes backed the campaign and raised the matter with the Presidency of the European Union, which was held by Finland until this month.

Wadsworth, whose mother is Finnish, said:  "This shows how a determined, grassroots campaign can succeed against formidable opponents like the food giant Cloetta Fazer who arrogantly maintained to the very end that they would not remove the logo. News media-generated bad publicity for the firm, including what we carried on The-Latest, combined with political pressure forced the company to give in."

Claude Moraes MEP said he had been shocked by the hate mail he had got from Finland, after supporting the campaign: He commented:  "I am really pleased Cloetta Fazer have finally seen sense and done something that is long overdue. Logos on sweet packets may not be the most important thing in the fight against racism but symbolic issues of this kind are a barometer of good race relations in a country like Finland which prides itself on its enlightened social policies."

London correspondent of Ilta Sanomat, the top-selling Finnish newspaper which first publicised the issue, explained why people had reacted so 'aggressively". Sanna Ukkola said: "Finnish people seem to react quite strongly - many of them felt that Fazer is one of Finland's traditional symbols like Nokia, and that is why they support the image as a matter of national pride."

Cloetta Fazer grudgingly accepted defeat. Explaining their about face, communications chief Anita Laxen said:  "The package raises debate in the multicultural society, and additionally, the wrapping needs to be improved in the international market. That is why we are changing it."

The company said new packaging would be introduced at the end of the year.

Musician braves coldest part of the globe for charity

<p><strong><u>Chris Gaynor</u></strong></p> Just shows you campanies do not think about the ramifications of the products they advertise or design!