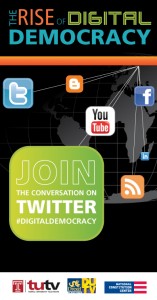 2011 was a big year for news in more ways than one. Reporters were amply tested in their coverage of big breaking news stories.

This included the death of Osama Bin Laden or Muammar Gaddafi, major disasters such as the Fukushima earthquake, and complex political unrest in much of the Arab World.

Meanwhile, newspapers continue to seek an effective digital business model, to tackle the challenges posed by social media and community involvement, to create innovative tablet applications and respond to ethical dilemmas. Looking forward to 2012, what can we expect?

Social media sprang to the forefront of the global stage in early 2011, with many directly attributing the extent of the uprisings in the Arab World to the power of Facebook and Twitter. Citizen reporting and commentary on events using social media has also flourished in the Arab World and Anglophones have followed Twitter coverage via National Public Radio’s Andy Carvin. Will this use of social networks to provoke and cover dramatic uprisings continue?

Facebook, with its 800 million plus users, has been a top priority for news organisations in terms of their social media strategy in 2011, dwarfing smaller players such as Foursquare and so far fending off competition from new arrivals such as Google+.

Most publications now have at least one Facebook page and several are experimenting with new apps using Facebook's Open Graph initiative. So far, readership levels seem to be high and it is likely that more news organisations will be keen to tap readers through Facebook.

Will Facebook's dominance continue into 2012, or will a network like Google+ - which has just introduced changes to make it more appealing to brands and businesses - put up a worthy fight? Twitter is also planning to introduce brand pages - what impact will these have?

Already, many journalists have vast numbers of fans and followers of their personal Facebook and Twitter accounts - will 2012 see a growing divide between brands and individuals on social media?

Bringing the community into the newsroom

In the world of the overwhelming information on the web, newspapers are struggling to sustain their role as a central hub for news, and in 2011 many started to focus on interacting more closely with their communities and encouraging conversation among their readers as well as between readers and the papers.

Readers have been invited to participate in the process of local journalism in JRC's Register Citizen's newsroom café, where the paper's new office allows the public into the newsroom on a daily basis to influence, comment on and enhance coverage. Involving readers in the daily editorial decision making process is also the aim of Swedish local paper Norran's live chat eEditor, where readers can discuss story ideas with journalists in real time. Becoming accessible also means becoming more transparent, which is what the Guardian set out to do by publishing the paper's newslist online.

Expect to see more of such attempts to put readers at the heart of the newsgathering process in 2012 as newspapers realize the benefits of a strong and loyal community.

In March 2011 The New York Times launched its much-anticipated paid digital content strategy and others have followed suit. Metered, intermittent, or impenetrable: no single digital paywall strategy has yet proven itself as the best. The existence of multiple digital devices means that most news organisations who do charge offer various different subscription offers across platforms.

Monetising app content brings further complications as it means dealing with those who control operating systems such as Apple, which takes a 30 per cent cut of all App Store purchases. Expect to see more newspapers following the example of the Financial Times, which has launched a browser-based HTML5 app that allows it to bypass Apple's store completely.

It's unlikely that a definitive solution to the digital monetisation question will emerge in 2012: expect to see newspapers continuing to experiment with new ways to strike the best balance between charging for content and not losing readers. Hopefully we will also see attempts to find new business models as news organisations realise that there might not be just one strategy.

At the end of 2011, the word 'tablet' no longer necessarily conjures up just an image of the iPad, as it did at the beginning of the year. Apple still shipped more than half the world's tablet devices sold in the third quarter of 2011, retaining a 61.5 per cent share of the global market, and no competitor claimed more than 6 per cent, but cumulatively they have managed to make a dent in Apple's dominance.

In 2012 we can expect to see Apple's market share continue to slide and Android-powered devices becoming more common, although there is little doubt that the iPad will remain the most common device.

In terms of what news organisations offer on the tablet, we can hope that 2012 will see some innovative and exciting new products. Although some impressive exceptions exist (such as Ringier's the collection), many papers have adopted a straightforward approach to tablet apps that does not take full advantage of what the device has to offer.

Some news organisations have already taken big steps with HTML5 and by the end of 2012 it may well be common for papers to produce HTML5 products before native apps, both for financial motivations (see above) and for ease of developing.

The tablet market is growing but it is still tiny compared to the smartphone market - maybe 2012 will also see news organisations re-evaluating their priorities in terms of digital delivery and focusing on the phone as a key device.

The digital first mantra advocated by John Paton of the Journal Register Company has led to the creation of a new company actually called Digital First, a result of the merger between JRC and MediaNews Group, and the subsequent roll-out of this philosophy at many local US newspapers. Digital first is not intended to imply neglect of the print product, but rather recognition of the fact that digital must come first in the news cycle, and that digital surely is the future and it is worth investing in it now.

The Guardian has also expressed its commitment to going digital first "in philosophy and practice," a process which involves losing staff but also taking on more developers and others with digital skills.

In 2012, expect to see other publishers making steps towards digital first as there is a growing acceptance of the necessity to concentrate efforts on building a business out of digital news. Many are realising that achieving true newsroom integration is a long and complex process that requires an entire overhaul of workflows, processes and mindsets in the newsroom if it is to be truly effective, so they are looking for next steps.

New skills in the newsroom

Data, data and more data. In 2011 we saw an explosion of data-powered journalism, often displayed through visualisations, infographics, and interactive maps and apps. New web tools have made an incredible flood of raw data accessible which can then be visualised, organised in searchable databases, aggregated in interactive tools and used to investigate complex issues such as the UK riots that the Guardian analysed with the Reading the riots project. ProPublica also makes impressive use of data.

Non-linear forms of storytelling are likely to feature highly on the agenda of forward-thinking news organisations in 2012 and consequently journalists will have to keep up with the skills required to shape stories and make them comprehensible to the public. The data journalism handbook published during the Mozilla Festival in London last November could be useful in this.

Technical skills such as coding will likely become more and more essential for journalists entering the trade in 2012 and we may well see retraining of more experienced journalists so that they can make best use of what data has to offer.

A high level of competence in effectively using social media is also increasingly becoming necessary as its use becomes more and more integrated into reporting as well as communicating with readers.

At the start of 2011, few would have thought that the year would end with one less national newspaper publishing in the UK, and the entire press under scrutiny with regards to its ethical conduct. The phone-hacking scandal at Rupert Murdoch's The News of the World dominated media news in the UK in the second half of the year, and made headlines around the world as the paper was closed down and News International executives resigned. With both publishers and editors called in front of a judge, any belief that newspapers can defy the law with no questions asked has been strongly shaken.

2012 will see the beginning of the wider impact of the scandal as the Leveson Inquiry unfolds and recommendations are likely to be made for a more thorough regulation system in the UK. The inquiry will consider to whom the press is accountable, and how far outside interference is necessary.  Will self-regulation be deemed sufficient? Will there be an impact overseas? Will the results for journalism be positive or negative?