Torture in the dentist's chair 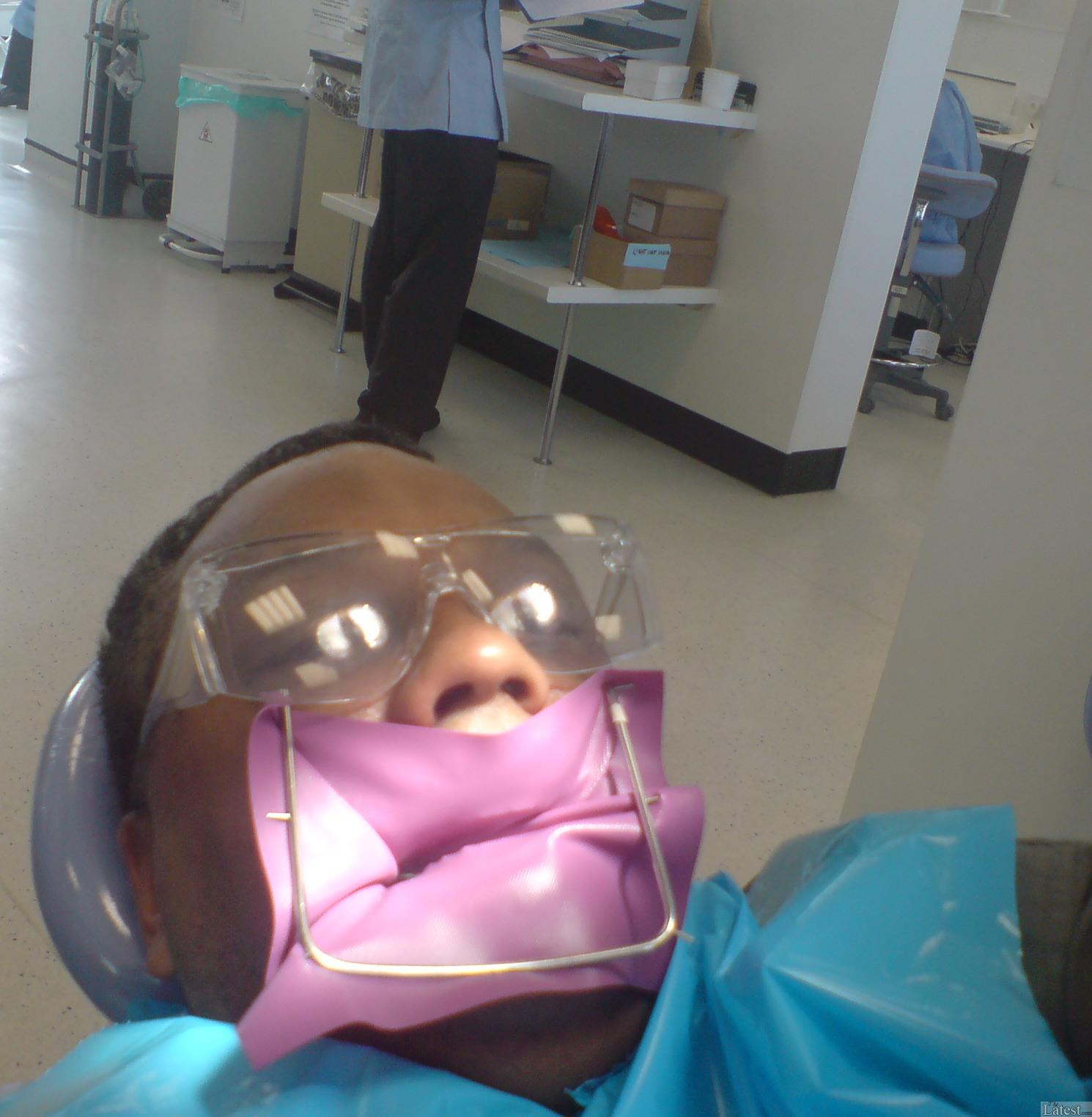 It's a good job that a feedback form filled in by patients is not one of the requirements for trainee dentists to qualify. Because the young man who put me through an ordeal lasting more than two hours yesterday would have failed.

Wispy bearded Joe Knights had the confidence of a public school boy, even if his hands were a bit shaky when he set about his task at King's College Hospital in south London. You could tell from his clipped speech that he was a bright guy.

Joe's root canal work on a molar on my lower left started with him fixing into my mouth two unpleasant contraptions - a small hollow bridge clasped to the gum around the tooth and an ugly purple, elastic dam to stop saliva going to the place being operated on (see photo).

Everyone hates going to the dentist. There is the screech of the drilling, with fine bits of saw-mill smelling tooth being atomised. The intermittent suction of fear-induced saliva. The poking and scraping to extract the decay from the tooth, which produces a rotten egg odour. And the repetitive pleas for you to open wider your aching jaws. All under a bright searchlight.

Fifth and final year Joe, 23, cheerfully told me he had passed his last exam and was stressed sending out dozens of CVs and applying for a job. I did my best to sympathise with him.

Still I was left alone without apology, clear plastic goggled and blue aproned in the dentist's chair at least four times, saliva dribbling from my gaping mouth, as Joe went to find his teacher or to get the things he needed. The sensory experience was freaky. I couldn't see anyone around me - just heard voices - because of the prone position I was in and nor could I scream out for a tissue to clean up. Joe sealed his half day's work with a temporary filling. (I have three more appointments with him). But, before I was allowed to go, there was the radiograph session to check for success. I know it best as an x-ray. Joe led me, looking like a dentist's version of Frankenstein, into a nearby small room.

He put another device into my crowded mouth. This was the worse of all; a Heath Robinson object with a over-seized sim card type part which cut into the soft tissue below my gum so that Joe could get a good x-ray of the tooth. It triggered an involuntary physical reaction that almost made me vomit. As I gasped for air, something tickled my throat and I began to cough. I thought, I'm not a quitter but I've had enough. I'm going to have to disappoint Joe and tell him we'll have to do this another day. He deserved it.

Not once did he enquire: 'Are you ok?' His only refrain was: 'Can you close your teeth together.' He probably thought I would flee, if he acknowledged the bad state I was in, and he wouldn't get his good marks. Yet, every time I tried to do his bidding that vicious sim card dug painfully into my mouth. God knows how I managed to please Joe for those minutes that seemed like a torture-full hour.

I'll forgive him my moments of discomfiture and neglect, plus the needle of the syringe which scratched my chin and dropped liquid on my cheek as he awkwardly injected my gum with anaesthetic, after at first drilling without it because he said the nerve in the tooth had already been removed. Joe has proved to me that he's ruthless enough to get a job and probably turn out to be a bloody good dentist, despite the rude words I might have written in a patient's questionnaire. I guess it was all in a good cause for the National Health Service and my healing tooth.

Why Brown should grasp the PFI nettle

4 Responses to "Torture in the dentist's chair"

<p><strong><u>Chris Gaynor</u></strong></p><p>Perhaps they should make a film called The Dentist. &quot;A driller killer ready to wreak havoc on patients, a sort of Texas Chainsaw Massacre of The dentist world.&quot;</p><p>Just when you thought it was safe to go to the dentist, this happens.</p><p>I am, of course, joking!</p><p>I like the well written story though - on a more serious note, I wonder how Joe will cope with the pressure when he does get a job full time.</p>

You were quite lucky Marc - my brother ended up having a root canal and &nbsp;&#163;3000 worth of dental surgery on a tooth that turned out to be a pain caused by muscle spasms, not a bad tooth... I think the only thing I never want in life is a root canal, but if it&#39;s one you need, fair enough - shame my brother&#39;s wasn&#39;t!

I have a friend studying to be a dentist and she needed someone to work on to pass an exam. I offered of course not knowing what I&#39;m gonna be in for. Being a student she wasn&#39;t as fast as a practicing dentist and it was quite odd having other students and doctors there in the room. Finally, all went well, I lost half a day but she passed her exam. I started searching for a dentist right away because there still were so problems with my teeth. I found some in my area using the <a rel="follow" href="http://adkinsdentistry.com/">Scottsdale cosmetic dentistry</a>. By changing the area, you can find one closer to your home if you&#39;re in need of a new dentist.