Tory MP would 'rather die' than form electoral pact 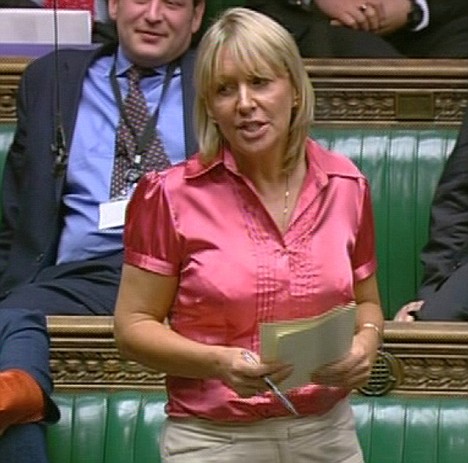 Outspoken British Conservative Member of Parliament Nadine Dorries has said she would "rather die" than fight the next election in an alliance with the Liberal Democrats.

"In my own perspective, and speaking in no other capacity but as an individual, I would rather die than go into a full election as a coalition candidate," she said.

"I fought them for every council seat, I fought Andrew Stunell in 2001 in Hazel Grove, I have been fighting them every day until the coalition was called."

And the Mid Bedfordshire MP said the Liberal Democrat candidate she defeated at the past general election was behaving like a "Japanese prisoner of war" not realising the conflict was over.

She added: "My previous Lib Dem opponent, she is a bit like a Japanese prisoner of war, no one has told her the election happened. She still thinks it is going on; she is still fighting the Lib Dem corner.

Dorries was speaking at a fringe event at the Conservative Party conference in Birmingham hosted by Dods, the publisher of ePolitix.com.

The MP who has been described as “a right-wing working class Conservative” said that while she was "fully bought in" to the current coalition she insisted there was no prospect of an electoral pact at the next election.

"The job to be done is to repair the damage created by Labour," she said.

"Once the processes and policies have been put in place, then I don’t see any future for a Conservative-Liberal alliance going forward."

And Dorries suggested that a recent book by fellow Tory MP Nicholas Boles that floated the idea of the Tories and the Lib Dems fighting the next election together had been commissioned by others in the party to test the waters.

"I don’t believe Nick Boles would have written that book unless he had some permission to do so. And I think he was an outrider, he was putting the idea out there to see how it goes and see how it is received," she said.

Boles is known to be close to many in the inner circle of the Conservative Party, including David Cameron. Dorries said the book was "received badly by the majority of MPs."

"Nick Boles has made no friends in the House of Commons, certainly on the Conservative benches, with that proposal," she said.

Boles will discuss his book Which way is Up: The future for coalition Britain and how to get there at a fringe event this evening in Birmingham. 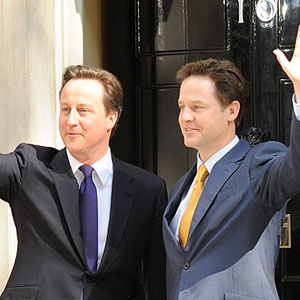 "They are more opposite to my beliefs than Labour".

Dorries' aversion to a pact with the Liberal Democrats was shared by Tory MP Conor Burns, who told the fringe meeting that the Conservative's coalition partner had been "viscerally unpleasant" to him when campaigning.

"Anyone who has ever campaigned against the Liberal Democrats on the ground despises them," he said.

The Bournemouth West MP said he had fought seven winters against them in his time as a Conservative candidate.

"They were viscerally unpleasant, cloaked and masked in a nice fluffy idea of 'serving our community'. The lies and the smears and the innuendo that they spread against me over the years I will never ever forget.

"And it really does stick in gullet to call Chris Huhne my Right. Honourable friend.

But like Dorries, Burns said he believed that the coalition would last for the full five years as planned.

"It will not be in our interest of Liberal Democrats interest to dissolve this coalition until we get to the other side of the economic mess."

While the two Tory MPs were scathing in their words for their coalition partner, they had much more complementary things to say about Labour's new leader, Ed Miliband.

Dorries entered Parliament in 2005, at the same time as Miliband, and said they became fast friends.

"We shared computers next to each other in the House of Commons library for days on end, we had lunches together," she said.

"And what I can tell you about Ed is this, he is incredibly kind and personable and a human person, unlike the majority of us in Westminster, Ed has a quality which a lot of MPs don’t have.

She explained: "MPs are process driven, it's all about maintaining your seat, maintaining your role, getting up the greasy pole, about getting your promotion, about keeping the party line, and sometimes the human kindness and empathy and compassion can get lost sometimes in that.

She said that when he was energy secretary Miliband personally telephoned her to reassure her pensioners in her constituency would not be adversely affected by changes to the Warm Front household energy scheme.

"One day I got a telephone call personally from Ed and he basically said, 'keep this under your hat at the moment but it’s going to be OK because we are moving the barriers on Warm Front and your pensioners will be OK'.

"I was a Conservative backbench MP and he took the trouble to telephone me and confidentially give me information. She added: "That says a lot about how this man operates."

And she said Miliband should not be offended by jokes about his appearance, including awkward Tom Hanks character Forrest Gump.

"Forrest Gump triumphed over adversity, he was the hero," she said. "If I was Ed Miliband and people were calling me Forrest Gump I'd be delighted".

Burns also complemented the personality of Labour's new leader, telling the fringe audience that he thought he was a "really nice bloke" and since their first meeting on the Commons terrace he always remembered his name and said hello.

But while she was full of praise for Ed Miliband, she did not have such kind words for his defeated brother who she said would have posed less of a challenge to the government.

"David Miliband would have been less of a threat, because he is not a nice piece of work, he is an unpleasant individual, he is the complete opposite to his brother, she said.

"Ed is a serious concern to us as a party. That’s why we have got to keep reminding people Labour should be apologising, these are Labour cuts and Labour job losses."

In a wide ranging discussion about the direction of the Conservative Party, Dorries also criticised the decision to campaign on the concept of a 'Big Society'.

"I believe the reason we didn’t win an outright majority was because we went out and talked about the Big Society when we should have been talking about immigration and other policies which effect people in their day to day life," she said.

She added: "That doesn’t mean that the Big Society isn’t real and important. We are going to have to grow a Big Society because we’re going to see cuts.

"We are going to be looking for the voluntary sector to step up to the plate to fill in the gap, to assist, to help.

"Unfortunately there was too much emphasis on the Big Society too early and people didn’t really understand what it meant.

In the election if I knocked on someone's door and said I am going to stand for the big society they were like, 'What? What is that?'.

"And so it was a problem during the election. Personally I would have liked for us to have talked about other polices, get the election over, win outright, and then talk about the big society."