Truth about dictator Noriega and the ‘criminal’ US invasion 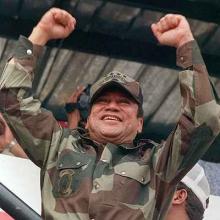 The US invasion that toppled Panama's worst dictator was part of a series of assaults aimed at reasserting the power of the Washington military/industrial/surveillance complex, argues Richard Lance Keeble.

General Manuel Noriega, who died on May 29, can only be understood in the broad context of the history of covert and overt US military aggression. He was the notorious dictator of Panama whose reign of terror was ended by the US invasion of 1989.

Significantly, the American military action was in total violation of international law (though corporate media coverage has conveniently ignored this). It was condemned by the UN Security Council (the vote being vetoed by the US, UK and France) while the UN General Assembly deplored the intervention and demanded the immediate withdrawal of US forces from Panama.

The “human interest” bias of the media’s coverage in 1989 served to marginalise this critical historical background to the action.

Recent mainstream media obituaries have concentrated on Noriega’s place in the history of his country mentioning, without any hint of outrage, his long history of involvement with US intelligence followed suddenly by his capture and jailing. The Times’s obituary, on May 31, even described the 1989 intervention (one of many cases of US “regime change” before the more controversial toppling of President Saddam Hussein during the Iraq invasion of 2003) as “curious” and “strange”.

But the Panama operation, launched on December 20 1989 (and codenamed Operation Just Cause), supposedly to arrest Noriega on drug charges, was part of a series of US/UK assaults on puny Third World countries – all of them aiming to “kick the Vietnam syndrome” and reassert the power of the military/industrial/surveillance complex.

Memories of Britain’s 74-day Falklands conflict, 35 years ago, may have drifted into the dustbin of history – and yet it was to set a hugely significant precedent. Here was a First World country, with a considerable military tradition behind it, taking on a Third World country almost entirely dependent on First World countries for supplying its army. As in the later conflicts, victory against the enemy, whose power was grossly exaggerated in Western media propaganda, was declared after only a relatively short period of fighting.

The strategy was to be repeated in Grenada, in 1983, when US forces invaded to remove a recently installed revolutionary military council. Three years later, for 11 minutes in the early morning of April 14, 30 US Air Force and Navy bombers struck Tripoli and Benghazi, in a deliberate attempt to assassinate the Libyan leader, Colonel Mu’ammar Gaddafi.

Then came the Panama invasion. All of these rapid assaults were celebrated in the corporate media in the US and UK. But the appearance of a major “war” was needed to eradicate the trauma of the Vietnam defeat. The Iraqi invasion of Kuwait in August the following year, provided the Western elite with their opportunity to fight their “perfect war”. Saddam Hussein (a long-time ally of the West) was suddenly transformed into a global monster. The 42-day Operation Desert Storm, in which US-led forces evicted Iraqi soldiers from Kuwait, culminated the 1980s strategy to legitimise aggressive US/UK militarism in the post-Cold War era.

Some 24,000 troops participated in the Panama invasion making it the largest US military operation since the Vietnam War. It also constituted the twelfth US invasion of Panama since 1903. The US armed forces used the rock music of Guns N’Roses and Elvis Presley, played at maximum volume, to “terrorise” Noriega into surrendering on January 3 1990.

In many respects the Panama invasion can be seen as another testing of the media/fighting strategy that was to be repeated during the Middle East massacres of 1991 and 2003. At the heart of the Pentagon strategy was the representation of the attack as swift and clean. As Patrick Sloyan, of Newsday, commented, the muzzling of the press in Panama created “the illusion of bloodless battlefields”.

The Pentagon was at first reluctant to provide any casualty figures. Only three weeks after the invasion did Southern Command say that 202 Panamanian civilians and 314 soldiers had died. Later it reduced the figure for military casualties down to 50. Yet the Spanish language press both within and outside the US (InterPress Service, Echo, of Mexico) cited more than 2,000 deaths and approximately 70,000 casualties. The National Council of Churches and the Red Cross also estimated the total civilian deaths may have numbered 2,000 at a minimum. A number of mass graves were discovered after the invasion.

Only 23 US soldiers were reported to have died in the operation. After Newsweek reported that as many as 60 per cent of these casualties may have resulted from US action (known in euphemistic militaryspeak, uncritically adopted by the media, as “friendly fire”) the Pentagon announced for the first time that US action accounted for two of the 23 deaths and 19 of the 324 injuries.

As was to be later echoed in media coverage of the Iraq (and 1999 Kosovo) crises, much of the media coverage of the Panama invasion focused on a demonised personality – in this case General Noriega as newly defined by the Bush administration. He was accused of brutally suppressing the results of an election a few months earlier and of heading up a huge drug-running operation. 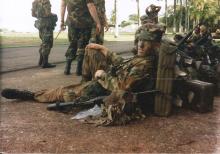 But such a “human interest” focus downplayed the history of US involvement with Noriega. He was recruited by the CIA’s chief of station in Lima, Peru, in 1959 to provide information on his fellow students at the Peruvian Military academy and his links with Central American drug barons and US administrations were close, in particular while George Bush Snr, who was briefly head of the CIA during the Ford administration (1975-1976).

Noriega is said to have met Bush Snr personally twice – in 1976 and 1983. He was involved in the CIA’s Black Eagle operation, according to which Israeli stocks of captured Palestinian Liberation Organisations weapons were moved from Texas to the terroristic Contras fighting the leftist Sandinistas in Nicaragua by means of his network of hidden airstrips.

In 1984, Noriega refused to accept the election victory of Arnulfo Arias and installed, to US applause, Nicolas Ardito Barletta in his place. Dan Winter, the CIA station chief in Panama, even said at Noriega’s later trial for drug trafficking that he had been the agency’s “best liaison with Fidel Castro” and that his “retainer”, totalling $320,000 by the time of his capture, had been money well spent. Even before the US invasion of Grenada in 1983, the CIA consulted Noriega. 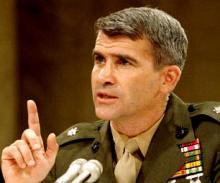 But by 1989 Noriega had drawn the wrath of the Bush administration for refusing to co-operate in Colonel Oliver North’s plan to use a shipload of arms to accuse the Nicaraguan Sandinistas of smuggling weapons to the Salvadorean rebels. And when Noriega realised that his country’s wealth was even better suited to an alliance with the huge Medellin drug-trafficking cartel of Pablo Escobar, his fate was sealed.

Then, more significantly, the administration wanted to revoke the Panama treaties of 1977 (signed by President Jimmy Carter and Panamanian strongman Omar Torrijos) according to which control of the Panama canal was to pass into Panamanian hands. In addition, US military bases were to be phased out by the year 2000 – yet the Bush administration saw them as crucial staging posts for military intervention in Latin America. On January 2 1990, a Panamanian was due to be appointed head of the Canal Commission.

After Noriega was arrested he was put on trial in Miami on 10 narrowly defined drug-related charges and sentenced to 40 years in prison. The trial heard nothing about Noriega’s contacts with CIA chief William Casey and other key figures in the Reagan and Bush administrations who allegedly connived in the supply of arms to Nicaragua’s Contra rebels paid for with Medellin cartel drug cash.

*Richard Lance Keeble is Professor of Journalism at the University of Lincoln and Visiting Professor at Liverpool Hope University. His Covering Conflict: The Making and Unmaking of New Militarism  has just been published.