Ugly face of British policing has shocked me 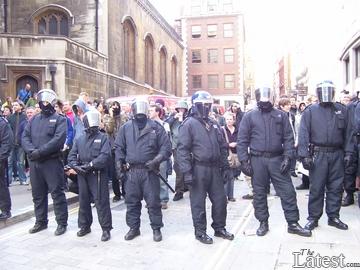 Controversy continues to rage over the heavy-handed policing of G20 protesters in London on April 1 as anger rises over the death of innocent bystander Ian Tomlinson and victims of brutality at the hands of riot officers are uncovered by big media thanks to citizen journalism photography.   Deborah Hobson, Deputy Editor of The-Latest, explains why the traumatic experience has changed her view of British police.

"First show a little respect, change your behaviour, change your attitude, change your plan". The "in your face" lyrics of US rapper KRS-One in his belligerent hit song Sound of Da Police rages against the illicit actions of the New York Police Department. Substitute the target of his frustration with British police and you might get an idea of the feelings felt by thousands of people "detained" like me in the open air prison that the City of London was turned into on that fateful day.

The blatantly aggressive riot police chant of  "Move! Move!" to the G20 protest crowd sounded like a cross between loud moos of cows and the threatening noise made by hooligans at a Millwall football ground in south London and is still ringing in my ears. The image of the snarling policeman who insisted on shoving my petite frame along a street close to the Bank of England with his riot shield is enduring.   As is the damning video footage of innocent father of nine Ian Tomlinson, 47, being walloped with a truncheon from behind by the policeman who then violently pushed him to the ground moments before he died. A pathologist found massive bleeding in Tomlinson's stomach.

What was our crime? Why were people who, for the most part, attended the G20 protests to peacefully show their contempt for fraudster bankers, concern for the environment and the issue of climate change as well as global poverty denied free movement and liberty for up to eight hours?

I was there to report for The-Latest.com. Corralled like cattle at a meat market, I observed increasing pockets of disturbance as the hours passed and the police stubbornly adhered to their controversial, repressive tactic of   "kettling"; placing the public in a small square outside the Bank of England under siege. Confining us against our will in a space with no toilets, water or food. We were forced to humilatingly plead with our captors to set us free but to no avail. 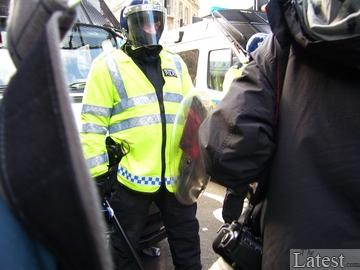 As dustbins burned near Bank underground station and   effigies of bankers swinging from lamp posts slowly turned to ashes, riot police wearing black balaclavas pulled over their faces to make their eyes their only discernible feature, grasped their batons unmoved and unwilling to attend to the emerging dangers to everyone's safety and determined not to break their stifling cordons.

I saw a number of young men, faces streaked with blood from ghastly head wounds, unable to get out of the prison to receive much needed medical attention. For the record, I boldly   took a picture of one of them.

No doubt if newspaper seller Ian Tomlinson had not been restricted from finding his way home after finishing work due to the bizarre "kettling" policy of police that breeds confrontation rather than peace and harmony, he would probably be alive today.

In the fading light of evening, with emotions of frustration and anger welling up inside me, I spoke to Tom Brake, Liberal Democrat Member of Parliament for Carshalton and Wallington, who was invited to be a  "legal observer" at the G20 protests by the Climate Change camp.   Questioned about policing in the area around the Bank of England and the legality of preventing masses of people from leaving, he said:   "Earlier in the day policing was fine but things seemed to have got bad later on. The last time this sort of thing happened there were some legal challenges brought by demonstrators but they were not successful."

He later remarked that the police actions in stopping the free movement of protesters "went on far too long".

I was hugely disappointed with Brake's timid comments which hardly reflected the level of outrage expressed by us, the victims of   "kettling" on the day and in later reports. Parliamentarians and human rights organisations like Liberty, headed by the current media courted darling of political talk shows Sharmi Chakrabati, have been far too slow and downplaying in their reactions to the damning photo and video evidence, largely supplied by camera wielding members of the public, that graphically exposed brutal police actions on April 1.

However, in the wake of ongoing Independent Police Complaints Commission (IPCC) investigations into the death of Ian Tomlinson, the police assault on Nicky Fisher and IT worker Alex Cinnane, IPCC chief Nick Hardwick has spoken out stating that the police were "servants" not "masters" of the public.

Hardwick, who is due to attend the House of Commons Home Affairs Select Committee on Tuesday, has expressed his alarm over some officers suspected of removing their identification numbers. He said, nodding favourably in the direction of citizen journalism: "I think that raises serious concerns about the frontline supervision. They (the police) have to respond to the fact that they are going to be watched, there is going to be this evidence of what they have done."

He added:  "The number of people who had filmed the protests on their mobile phones was proving a key factor in helping the IPCC determine whether complaints made against the police had any legitimacy."

I've never really been anti-police. Even after the death of my cousin Roger Sylvester 10 years ago - the now notorious high-profile death in custody case in the UK, I retained some faith in the police and their ability to serve and protect the public peacefully and equally. This belief was fortified a few years ago when I became a victim of an attempted mugging and was dealt with by a charming, sensitive and sympathetic local police officer.

But, at the G20 protests, I felt safe and oddly protected in the company of protesters and extremely apprehensive of the police.

In a further ironic twist, the pathologist Dr Freddy Patel, who at worrying speed stated after his examination of   Ian Tomlinson that he died of heart attack (a second autopsy by another pathologist has found the cause to be internal bleeding) was the same doctor who initially examined Roger.

Patel caused great distress to my family by making inaccurate remarks to the press about Roger's medical history . He was subsequently reprimanded by the General Medical Council. This police "rent a post-mortem result" pathologist also needs to be investigated.