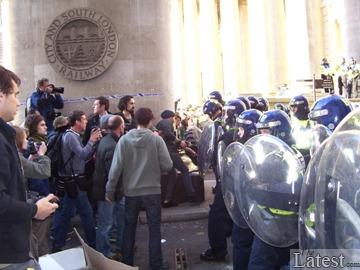 British politicians have accused the Metropolitan Police Service of sending "poorly trained" officers to control the G20 protests in London. The-Latest was the first news outlet to question violent police tactics on April 1 and the circumstances surrounding the death of bystander Ian Tomlinson.

The UK parliament's Home Affairs Committee said in a report on Monday that the police officers, who were placed at the front line of protests during April's G20 summit in London, had not received enough public order training.

According to the report, while specialist officers are trained almost once a month in public order techniques, many of the officers on duty at the summit received only two days of training each year.

One man died after being hit by a police officer, while a woman was slapped across the face and hit with a baton by another officer during clashes in London. British lawmakers believe that police actions during G20 protests have resulted in the loss of public confidence in the police.

"Never again must untrained officers be placed in the front line of public protests," the report said.

"At the very least each unit should contain a core of fully trained, experienced officers. While greater funding must be made available, the police must also allocate their resources better to ensure that all officers on the front line of public protest are trained adequately."

The committee also criticised police for employing the controversial tactic of "kettling" - forcibly containing a large crowd in one place by means of a cordon - during the protests.

According to sources, the Independent Police Complaints Commission is still considering scores of complaints from members of the public who said they were beaten by riot police at the protest. The IPCC has also launched an inquiry into why the police told the news media that none of their officers made physical contact with Ian Tomlinson apart to try to revive him. Video footage from citizen journalists showed that officers attacked him on at least two occasions.