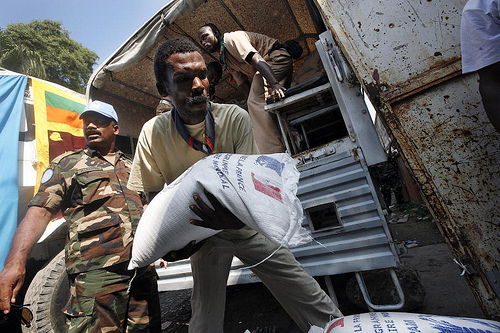 A disturbing video has been circulating online, showing four United Nations Stabilisation Mission in Haiti (MINUSTAH) peacekeepers from Uruguay allegedly raping a 19 year-old man at a military base in Port-Salut, a Southern Haitian town.

By some accounts, YouTube has censored some versions of the video - but even so, all of Port-Salut, most of Haiti and much of the diaspora have seen it via various channels. The graphic video shows four lighter-skinned or white men, one of whom is wearing a blue beret, holding a younger darker-skinned man down and restraining his arms behind his back while apparently sodomizing him. The young man is heard screaming for help.

The images have generated outrage on the internet, including a #withdrawminustah hashtag on Twitter. This is not the first MINUSTAH scandal; 6,000 died from a cholera epidemic brought to Haiti by Nepalese peace keepers from the UN force.

Réseau National de Défense des Droits Humains (RNDDH), a local human rights organisation, has published a report on the alleged rape case, recommending the UN provide reparations for this and other mishaps in Haiti. It also demands further investigation into yet another controversy for the United Nations force: minors in Port-Salut allegedly pregnant by peacekeeping staff at the base.

Journalists and bloggers such as Etant Dupain (@gaetantguevara) and Ansel Herz and Uruguyan televison [es] have since dug up details on children born to underage Haitian women and Uruguyan men.

Journalist Ansel Herz, who blogs at mediahacker, has published an interview with the two local youths who leaked the video to the Haitian press. One of them stumbled upon it on a peacekeeper’s phone while trying to transfer a song and captured the video via Bluetooth after recognising that the victim was his cousin. He has now received what he believes to be threats by night visitors to his home, according to [fr] Haiti Press Network.

The President and the Minister of Defence of Uruguay say they are speaking on behalf of their noble, hospitable and supportive people which recognises in Haiti a sister nation who expressed its solidarity during the struggle for independence of Latin American countries.

The chief of the Uruguayan UN contingent and the four suspects  have been repatriated and are due to be tried in the Uruguayan courts.

Haitians and Haiti sympathisers have reacted with anger, many seeing the apparent rape as a metaphor for how the mission and thousands of foreign NGOs treat Haiti.

@NegAyiti: Mission of the United Nations for Sacrilege and Bitter Terror in Haiti = MINUSTAH.

@GioJules: We have too many fake aid workers wannabe-famous journos #Haiti. Everyone come here to get their own piece of the cake just to spit on it

@GraceinTC, an American who fundraises for a Haiti-based dental care non-governmental organization, was as strident as some Haitian tweeters:

@GraceinTC: To say the MINUSTAH video is disturbing is the understatement of the century & angry, sick, broken hearted is a small portion of what I feel

She went on to say:

@GraceinTC: It is ridiculous that those in a position to “keep the peace” are in reality causing so much more pain than can easily be imagined….

Another American, who works at Let Haiti Live, asked for a completely independent investigation:

@melindaayiti: We must demand an independent investigation of MINUSTAH - the UN and and Uruguay don't cut it! #Haiti #justice #withdrawMINUSTAH.

*Alice Backer writes for Global Voices Online. She is also a lawyer and campaigns consultant who blogs about Hiati at kiskeácity.

'Tension here was palpable after the bloody mutiny'