Is unpopular student leader running out of excuses? 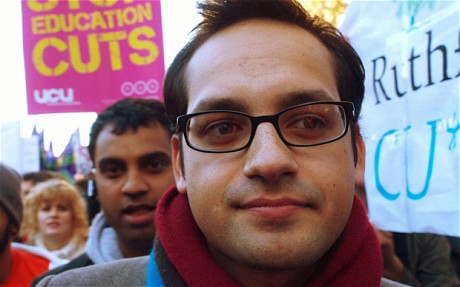 He's faced no confidence motions, vocal public criticism, and angry meeting halls since he responded so spinelessly, as he put it, to the wave of student protests against the UK government’s hike in tuition fees.

Recently, he was pelted with foodstuffs (eggs and custards) after refusing to debate the subject of tuition fees with students at Oxford University. The reply of Porter and his supporters when something like this happens is usually to blame the hard left, the Trots (Trotskyites), the SWP (Socialist Workers Party), or whomever.

They say it's left-wing sectarianism which is undermining a broad movement, just because a few troublemakers disagree with Porter's nuanced position on this highly complex matter. (Lately, that position has included complete surrender on the issue of fees.) In the run up to yesterday's protest, he wrote an article for The Guardian which some have characterised as sectarian, but which I would say was standard red-baiting.

Yesterday, having refused to back the main students protest in London, he turned up at the protest in Manchester and was literally chased off the protest by what I hear was about half of those who had thus far gathered. He was escorted by police into the National Union of Students (NUS) building, where he remained holed up. Later the NUS Vice-President was pelted with oranges and eggs (another variation on the foodstuffs theme). This resulted in a refinement of the usual script.

With the help of the Daily Mail, Aaron Porter's supporters have put it about that he was physically intimidated, threatened and subject to anti-semitic abuse. Porter himself said: "Just before the march started, I was surrounded by a particularly vicious minority of protesters more intent on shouting threatening and racist abuse at me rather than focusing on the issues. Instead of standing together and fighting the cuts, they instead chose to pursue me along Manchester’s Oxford Road and drive me away from the start of the march. As a result, under the strong advice of the police, I had to withdraw myself from the rally." It is alleged by the newspapers that Porter was called a "Tory Jew", or even "Tory Jew scum".

A few things, then. If this happened, then it's a hate crime, and it would be appropriate for Porter to report it to the police. As members of the public and police officers were present, they can bear witness on his behalf if the allegations are correct. However, the extraordinary thing is that so far there is absolutely no evidence for it.

The sole source quoted in any article on this is an unnamed photographer. You will search in vain through the raw footage for any evidence that such a thing was said. This does not mean that it wasn't. There can always be one or two idiots. But I have waited a day since first seeing the first, sometimes contradictory and nebulous allegations, and no evidence has been produced.

On the contrary, most of those who were in fact there assert that what was chanted was "Aaron Porter, we know you/We know you're a Tory too". Another extraordinary thing is that the NUS Black Students campaign has apparently felt compelled to issue a statement denouncing something that may not have happened. This is, to my mind, an unwarranted capitulation to what may well be a dirty tricks campaign to spin what was clearly otherwise a very bad headline for a very unpopular Aaron Porter.

Labour apparatchiks have a long history of this. Luciana Berger famously resigned from the NUS national executive alleging that the NUS was tolerating anti-semitism in its ranks. This was later debunked by an independent inquiry, but she established a reputation on the basis of this and was later parachuted into a safe Labour seat. Similarly, Oona King used accusations of anti-semitism against her opponents in Bethnal Green & Bow, though witnesses like Jonathan Freedland disputed her version of events. So, a dirty tricks campaign is hardly out of form.

Alex Andrews recommends that students go to the Press Complaints Commission if this is proven to be a lie, as Climate Camp activists were able to do when they were smeared by the Evening Standard. So, can I just say that this recommendation looks like a safer bet to me than issuing knee-jerk statements denouncing something that may not have taken place?

*Richard Seymour is a political activist who blogs at Lenin's tomb. He is the author of The Meaning of David Cameron