US military 'too white and too male' 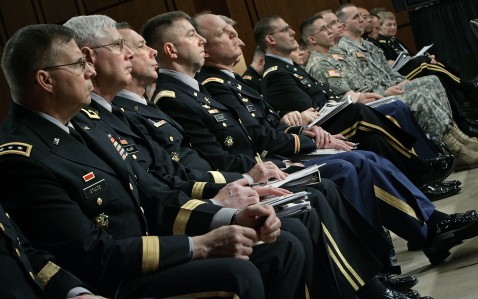 An independent report for the US Congress has stated this week that the American military at the top needs to change recruiting and promotion policies and lift its ban on women in combat.

The Military Leadership Diversity Commission who produced the report found that seventy seven per cent of senior officers in the active-duty military are white, while only 8 per cent are black, 5 per cent are Hispanic and 16 per cent are women. The Commission quoted data from September 2008.

One barrier that keeps women from the highest ranks is their inability to serve in combat units. Promotion and job opportunities have favoured those with battlefield leadership credentials.

The report ordered by Congress in 2009 calls for greater diversity in the military’s leadership so it will better reflect the racial, ethnic and gender mix in the armed forces and in American society.

Efforts over the years to develop a more equal opportunity military have increased the number of women and racial and ethnic minorities in the ranks of leadership. But, the report said:  “Despite undeniable successes ... the armed forces have not yet succeeded in developing a continuing stream of leaders who are as diverse as the nation they serve.”

“This problem will only become more acute as the racial, ethnic and cultural makeup of the United States continues to change,” according to the report. The Military Leadership Diversity Commission consisted of more than two dozen members including current and former military personnel as well as businessmen and other civilians.

Having military brass that better mirrors the nation can inspire future recruits and help create trust among the general population, the Commission said.

Among recommendations is that the military eliminate policies that exclude women from combat units, phasing in additional career fields and units that they can be assigned to as long as they are qualified. A 1994 combat exclusion policy bans women from being assigned to ground combat units below the brigade level even though women have for years served in combat situations.

“If you look at today’s battlefield in Iraq and Afghanistan, it’s not like it was in the Cold War, when we had a defined battlefield,” retired Air Force General Lester L Lyles, the Commission’s chairman, said in an interview. “Women serve - and they lead -military security, military police units, air defence units, intelligence units, all of which have to be right there with combat veterans in order to do the job appropriately.”

Because they are technically attached to, but not assigned to, combat units, they don’t get credit for being in combat arms, something important for promotion to the most senior ranks.

Stretching the definition of diversity, the report also said the military must harness people with a greater range of skills and backgrounds in, for instance, cyber systems, languages and cultural knowledge to be able to operate in an era of new threats and to collaborate with international partners and others.