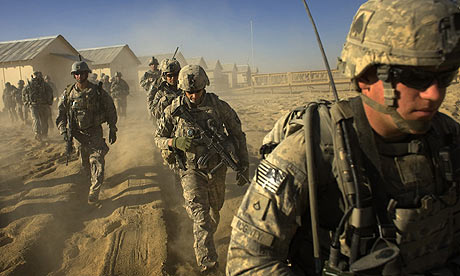 The inscriptions are in direct contravention of military rules designed to prevent criticism that the US is embarked on a religious "crusade" against al-Qaeda and the Taliban.

What is bizarre about this revelation - unearthed by the ABC News network - is that US military commanders were apparently unaware of the fact. The inscriptions were made by the sights' manufacturer, Trijicon, a Michigan company that has always operated under Christian ideals.

The news has brought a strong reaction from those who feel the separation of church and state must be upheld in the US military. "It's wrong, it violates the Constitution, it violates a number of federal laws," said Michael Weinstein of the Military Religious Freedom Foundation (MRFF).

"It allows the Mujahedeen, the Taliban, al-Qaeda and the insurrectionists and jihadists to claim they're being shot by Jesus rifles," he said.

The news is likely to be just as galling for military commanders who, given the rules, will presumably have to withdraw the sights from the frontline or have the inscriptions filed off.

Spokesmen for the US Army and the US Marines, both of which have multi-million-dollar contracts with Trijicon, told ABC News they were unaware of the secret inscriptions and were discussing what they should do about it.

The inscriptions are all references to New Testament passages and appear in the same type font and size as the model number on Trijicon's ACOG (Advanced Combat Optical Guides sights) sights.

One of the coded references reads JN8:12, short for John chapter 8 verse 12. The passage reads: "Then spake Jesus again unto them, saying, I am the light of the world: he that followeth me shall not walk in darkness, but shall have the light of life."

Other references seen by ABC News were to verses from Second Corinthians, Revelation and the Gospel According to Matthew.

Trijicon put up their hands immediately when approached by ABC News. Director of sales Tom Munson said the inscriptions "have always been there". The tradition was begun by the company's founder, Glyn Bindon, a devout Christian who died in a plane crash six years ago.

The company website could hardly be clearer about where Trijicon stands. "Guided by our values, we endeavour to have our products used wherever precision aiming solutions are required to protect individual freedom," it states. "We believe that America is great when its people are good. This goodness has been based on Biblical standards throughout our history, and we will strive to follow those morals."

Munson told ABC News that in his company's view, there was nothing wrong or illegal about adding the inscriptions and said the MRFF was "not Christian".

Weinstein, of the MRFF, responded: "This is probably the best example of violation of the separation of church and state in this country." He added: "It's literally pushing fundamentalist Christianity at the point of a gun against the people that we're fighting. We're emboldening an enemy."

No one seems sure where this one will go. But as one observer commented, if commanders feel bound to withdraw the sights, or at least order Trijicon to desist, will they also act against those troops who choose to wear a crucifix around their necks?