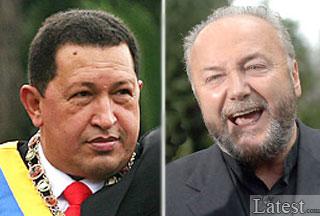 According to a report published by the Ma'an news agency, Galloway is currently in Egypt and is organising a new solidarity convoy to Gaza called the Lifeline 2.

The convoy is scheduled to enter the Gaza Strip through the Rafah Border Crossing. Some 200 American solidarity activists will join the group.

"President ChÃ¡vez will come with me in the next humanitarian aid convoy," Galloway told reporters in Gaza. He would not specify the date for ChÃ¡vez's visit.

Recently, ChÃ¡vez described Israel's government as "genocidal and murderous" on the occasion of the military attack launched early this year on the Gaza Strip, which left 1,400 Palestinians dead, according to Palestinian figures.

Venezuela severed diplomatic relations with Israel on January 15 in opposition to the military incursion.

Galloway, the Respect Party MP for Bethnal Green and Bow also stressed that he will continue to organise solidarity convoys to the war-battered coastal sliver in a quest to lift the Israeli siege which has plagued the terrain.

According to a newly released report from the International Committee of the Red Cross, the Palestinians living in Gaza are "trapped in despair." Israel's two-year blockade has resulted in a complete economic breakdown of Gaza and more than 70 percent of the population is wrestling with destitution.

Galloway said that Israeli lobbyists had forwarded three requests to the US Attorney General Eric Holder, calling for measures to stop the convoy. However, the requests were rejected.

Cometh the hour, cometh the man