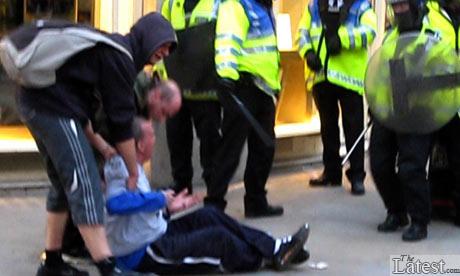 Damning video footage from an eyewitness has been released of British police pushing to the ground a man who minutes later died of a heart attack during a protest about last week's G20 summit in London.

The-Latest was the first news outlet to criticise heavy handed police tactics against demonstrators outside the Bank of England and link them to the death of Ian Tomlinson, 47.

Our Deputy Editor Deborah Hobson and photographer Cecilia Anesi were among the thousands of people placed under a medieval siege by riot police and they gave their accounts, in dramatic words and pictures exclusively to this site. Big media, meanwhile, concentrated on what they described as "anarchists" causing trouble and the brave police keeping law and order - which was far from the truth. In fact, apart from some isolated trouble, the vast majority of demonstrators made their anti-capitalism, anti-climate change protests peacefully.

Hundreds of aggressive riot police appeared to be under orders to make life hell for members of the public, who brought the UK's financial centre to a halt, to deter them from ever again exercising their lawful right to protest on the streets.

The Independent Police Complaints Commission (IPCC), the UK's police watchdog, now wants to analyse the footage handed to them from an American tourist as part of its investigation into father of nine Tomlinson's death on Wednesday.

The police officer who pushed him to the ground has now come forward, following two days of media publicity that forced him out of hiding. In the video, shown here, Tomlinson, who was walking home from his job as a newspaper vendor, had seemingly strayed into the protest area near the Bank of England, when a group of riot police with dogs tried to corral him forward.

He was walking away from the group in an isolated position, when a policeman approaches him, apparently hits him on the legs with a baton and then shoves him to the ground.

Tomlinson, who had his hands in his pockets and is seen offering no resistance at the time, was flung to the ground, after which bystanders came to his assistance.

Within minutes he had collapsed in a nearby road suffering a heart attack. Police attempted to resuscitate him and he was taken by ambulance to hospital where he was pronounced dead.

At first the police claimed that they had "not come into contact" with Tomlinson, a line swallowed without challenge by big media.

However, witnesses who have come forward state that, prior to the moment captured on video, Tomlinson had already been hit with batons and thrown to the floor by police who blocked his route home.

One witness, Anna Branthwaite, a  ­photographer, described how in the  ­minutes before the video was shot, she saw Tomlinson walking towards Cornhill Street.

"A riot police officer had already grabbed him and was pushing him," she said. "It wasn't just pushing him  — he'd rushed him. He went to the floor and he did actually roll. That was quite noticeable.

"It was the force of the impact. He bounced on the floor. It was a very forceful knocking down from behind. The officer hit him twice with a baton when he was lying on the floor.

"So it wasn't just that the officer had pushed him  — it became an assault. And then the officer picked him up from the back, continued to walk or charge with him, and threw him.

"He was running and stumbling. He didn't turn and confront the officer or anything like that."

New video footage shown on Channel 4 News appears to show an officer striking him with a baton.

Tomlinson's stepson Paul King said the footage has "deeply touched" the family and said "we cannot lay our father to rest" until the relatives get justice.

More than 4,000 anti-capitalist protesters had massed in central London the day before the G20 summit, during which world leaders discussed resolutions to the world economic crisis.

Effie Jordan, of the World Development Movement, echoed the views of the many non-governmental and other organisations who staged a march in London, ahead of the controversial protest, when she said that the  £1tn international economic package announced by the G20 leaders was a case of them "re-arranging the deck chairs on the Titanic".

Much more was needed, said Jordan, to tackle poverty, deprivation and disease in the developing world.