A wake up call to British cynicism 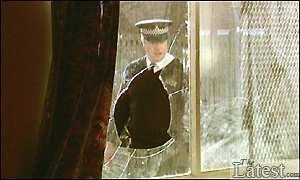 The most disorientating moment of the last few months happened to me in the early hours of last week. Roughly one hour after falling asleep, the loudest thing I think I've heard since seeing Iron Maiden in 2003 had descended on the house. The fire alarm.

After the ten seconds it took me to realise that yes, it wasn't my personal alarm, I was angry. Nothing more, nothing less. Upon waking up earlier that morning, I never assumed that my house was engulfed in flames. I assumed straight away that the "fire" had started in the kitchen, without flames, from frying burgers that, for all intents and purposes, were still cooking.

Of course, it was exactly how I predicted.

After all was rectified and the code was put in on the utterly useless controls, I went outside to get some fresh air and calm down the shakes after having my ears subjected to temporary tinnitus by the screaming red foghorns that littered the house.

In a street with 60 houses, there wasn't a peek. No heads peering out of windows, nobody standing outside, no-one nearby to enquire about what could have been Carrie recreating the prom blaze in our homestead.

Ultimately, nobody cared. And you know what? I don't blame them.

The amount of times we've all walked past houses where the alarms are going off is in the dozens, I'm sure. Hearing a car alarm in the street doesn't even attract a curtain-twitch. It reminded me of a time in 2003, when my college issued rape alarms to all and sundry for their protection, resulting in the surrounding area becoming an orchestra of intolerably loud beeps for a week, ultimately undermining the whole safety measure. It's like the boy who cried wolf. Well, the girl or boy who falsely cried rape.

We are completely numb to the safety systems put in place by, ironically, ourselves. The things we hope will deter others or attract attention are effectively superfluous - bought under what can only be described as socio-cultural pressures to defend oneself.

Whatever happened to the days when we cared about each other? The culture of the have-a-go hero has been consumed by self protection issues instilled in our brains over fears that we may be physically harmed or become criminally liable in some way.

It's gotten so bad that people have been instructed by the British Embassy to do the following if they are the victim of rape when travelling abroad:

"Consider beforehand what you might shout to attract the attention of other people. For example, in English-speaking countries you may receive more attention if you shout 'fire!' rather than 'help!'"

Yes, consider what you say while somebody tries to sexually assault you -it's only polite, after all.

What a cynical world we live in.

Lock 'em up and throw away the key

Is John Travolta's sexuality our business?

Whatever happened to all-Black shortlists for political hopefuls?