Want to be a better person? Get fat 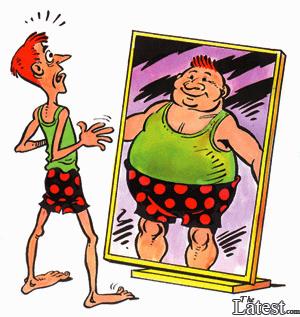 In a culture currently dominated by the fear-inducing words "credit crunch", it's somewhat comforting to see that certain businesses are still surviving. Practically gone are the likes of HBOS, Zavvi, Woolworths - companies which seemed to be cornerstones of the UK high street.

Still, surviving isn't the only thing some businesses are doing. Many are thriving. Fast food enterprises like Domino's Pizza announced increased margins. KFC is to create 9,000 new jobs using  £150 million of pure profit to fund expansion. Very well done. McDonald's is aiming for world domination after a lull about five years ago. Hats off to you, sirs.

Luckily, for these bastions of the questionable nourishment industry, people will always need to eat. I live in Leeds, which is the home to literally more than 15 Greggs supermarket outlets that I know of. Subways sandwich bars have expanded exponentially since 2004, when they first got a true foothold in every town centre in the country.

These, ladies and gentlemen, are our future. As the recession hammers the nails into the coffin of primary industry, the service sector takes over. These jobs - once the bane of most people's existence and a last-chance saloon for many a university graduate - are now reality. My beef isn't with the jobs they create, though. My beef's not even with the burgers, ironically. It's the people I want to succumb to this industry. Yes - that's right - I want them to get fat.

Here's a personal slant on proceedings. After nearly two successful months on the healthy regime to end all healthy regimes, I'm feeling great. Having peaked at 20 stone (which is still too much for someone who's 6ft 3in), I needed a change of pace.

My clothes are starting to look genuinely better on me and I have the drive to carry the clean living forward. The anticipation of seeing someone in six months who I haven't bumped into in years is making me happy on a regular basis for shock value alone. My confidence is through the roof.

Still, as much as it benefits my health and opens my shopping list to XL clothes from Top Man and not XL clothes from America in general, I forgot until now just how idiotic many people are about weight. The real reason I'm losing the flab, dear readers, is that I'm a victim of obvious culture. Fat is wrong. It's worse than smoking and alcoholism combined in the eyes of the masses.

Losing weight, however, woke me up to the stupid attitudes many people hold about being large. I'm now simply eating healthy. I think I'm hard pushed to even call it a diet, given that I'm still eating things I want but just choose not to throw it in a frying pan or buy it pre-packed.

Others, however, are too busy drawing up complex exercise regimes and starving themselves of the most basic human needs like carbohydrates and fats. These people, largely, are around their recommended weight.

These are the individuals who don't realise how shallow they can be. The biggest regular slap in the face to me over the last ten years comes when perfectly healthy and thin people go "Oh, I'm fat". Whether they mean it or not, it's not so much a comment about themselves as it is one about me. If these people are fat, I must be Bibendum - the Michelin Man himself - or some kind of roly-poly funster that is somehow fine with such undeserved self-deprecation which reflects off them and onto me, like a socio-cultural mirror.

Many of these people are blessed with mind-bending metabolisms and great looks. I've never really had that in my life. I'm getting a lot more confidence now, though. I'm still overweight - wonderfully so, one may say, but it's got me thinking.

Are you a person obsessed enough about your weight that you need to go through every fad diet, exercise or starvation trial? Fear no longer. I have the perfect solution to solve your personal hatred.

I beg you to throw caution to the wind for 12 months. A course of takeaways and Ben & Jerry's ice cream awaits you. Sounds simply awful, doesn't it? Despite the immediate evidence to the contrary, it'll work for your self-esteem.

If such people get fat, they'll know what others behind the flab need to do to set themselves apart. The character building, the sense of humour and the overall cynicism of most things that seem to be so superficial will start to seep in.

Then they need to work hard to lose it. They'll know what it's truly like to be thin. The hard graft and self-control elements previously non-existent in their physically-driven lives will prove that it's actually a genuinely rewarding experience.

I don't hate this kind of thin person though; far from it. They just don't know what it's like. It's easy for them to fire back about how I chose my life of being fat, to which I may nod sagely before flicking them the middle finger or two, depending on cultural relevance. I'm doing something properly about it though, after all of about a month where I was more uncomfortable with myself than I was confident.

Sure, it may be a worse situation for the human body in terms of health, but not necessarily for happiness. This world still gives many other ways to be unhealthy. Well, more socially acceptable ways. Many thin people who will look down on fat people will happily drink themselves to oblivion each weekend or smoke to their heart's content. If modern science is to be believed, we're all losing in the health game. Only certain contingents are affected by superficiality, however.

I may be a collaborator for choosing the thin way of life, but I'm benefitting from it in more ways than people will realise. Being imbued with confidence is wonderful, even at such an early stage in my healthy life. I've always given out an air of self-respect despite not really having any, which makes me wonder how much better a person I'll be when the weight has actually dropped.

I'll take the opportunity to be more active in my spare time and enjoy life at every possibility. That's much better than naturally thin people whinging to their friends about their weight while they sit and eat their latest unfulfilling diet while watching Tv.

They should get themselves into the town centre. If the credit crunch is to continue with its trends, there'll be plenty of places for them to start their new regime of fattening foods. At the end of it, they'll have self-respect, confidence, a better sense of humour and a greater level of understanding for fellow human beings. What more could you ask for in such a negative world?

Leader must return party to its working class roots

3 Responses to "Want to be a better person? Get fat"

<p><strong><u>Chris Gaynor</u></strong></p> Are you the type that eats and eats and doesnt put on any weight, or are you like me who barely has to look at a burger and my waistline expands even at the thought of it. Nice article, makes a change from reading dull stuff in the mainstream about job losses and interest rate cuts...

<p>I&#39;ve always been a big lad. As I say, I&#39;ve always been proud but it&#39;ll be interesting to take what I&#39;ve learned with me on the way to being thin. It&#39;s an interesting social experiment more than it is a push for health, although that&#39;s a great byproduct.</p><p>Thanks for the comments - I prefer apolitical, all-encompassing articles, I just struggle sometimes for clarity of thought with so much doom and gloom in the news...<br /></p>

<p>I've been over weight all my life and just started taking alli orlistat i don't think that once i lose it i'll change much.</p>