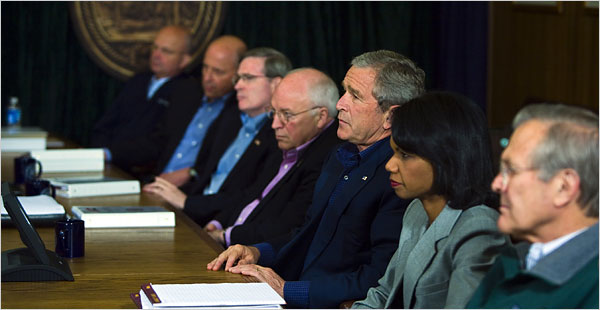 Professor of Law Francis A. Boyle of the University of Illinois College of Law in Champain, America, has issued a Complaint with the Prosecutor for the International Criminal Court (ICC) against former leading lights in the now defunct Bush administration for their practice of “extraordinary rendition” (forced disappearance of persons and subsequent torture) in Iraq and for criminal policy which constitutes Crimes against Humanity in violation of the Rome Statute which set up the ICC.

This Article stipulates that the Court may exercise its jurisdiction if one or more States in which the conduct in question occurred has accepted the jurisdiction of the Court. Furthermore, the forced disappearance of persons and torture in deemed by the Rome Statute as a Crime against Humanity, one which is still ongoing.

The issue of complaint states “about 100 human beings have been subjected to enforced disappearances and subsequent torture by the Accused”, adds that some of them could still be alive today, and that an investigation could save these lives. Regarding those whose enforced disappearances led to their deaths, the Complaint requests a process of explanation and clarification for what would be a murder investigation.

Talks not war are the key to peace with Iran