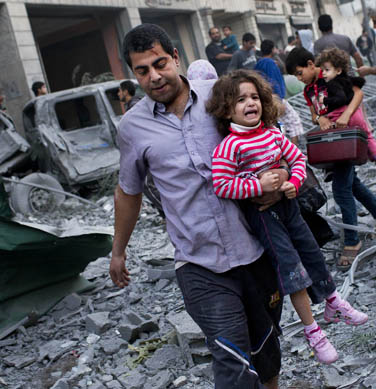 Israel's attack on Gaza last November once again led to huge loss of life and human suffering says War on Want, the charity that campaigns against poverty, inequality and injustice in developing countries.

Based in the UK, War on Want state they are urgently responding to their partners on the front line in Palestine, who have called on the charity to press for immediate action in Britain which will confront the root cause of the violence and end the suffering for good.

A statement on the War on Want website appeals for financial aid:

“We are focusing our resources on holding the UK government to account over its complicity in this latest attack. The UK sells arms to Israel, providing it with the means to carry out its acts of aggression. We are calling on the UK government to stop arming Israel and put in place an immediate two-way arms embargo.

“Even when the bombs stop and the cameras leave, War on Want will continue its battle to secure justice for the Palestinian people. We need a long-term solution and this is why we need your support. Please make a donation of £40 today to help us fight for justice for Palestinian families who have had their lives torn apart.

“Four years ago, following pressure from War on Want's Stop Arming Israel campaign, the UK government revoked five arms licenses to Israel for weaponry used in the 2008 attacks on Gaza. So we know from experience that this type of campaign works. We need your support today to put pressure on the UK government to stop the violence for good.

“The principal barrier to peace with justice is Israel's continuing violation of human rights and international law and its policies of collective punishment. War on Want is building the movement for boycott, divestment and sanctions on Israel, to force it to abide by international law.”

If you wish to stand in solidarity with families in Gaza and the West Bank, who want a better future for themselves and their children, please donate as much as you can give today: http://www.waronwant.org/