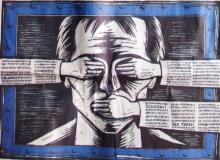 With journalists around the world being killed, kidnapped, and murdered in record numbers why is the Committee to Protect Journalists (CPJ) launching a campaign targeting US government policies?

The answer is simple. Because we must fight to preserve a global system on which independent and critical journalism depends. Journalism today lives online, and the ability to post, share, and communicate across borders is what defines the current era. This ability also threatens powerful forces, including autocratic governments and militant groups that reject critical scrutiny. Many have lashed out at the media, and repression of journalists around the world has increased as a result.

Let's be clear. Journalists in the US face limited physical risks and, with the very notable exception of James Risen, few are confronting the prospect of jail. But the threat to independent reporting is real. And what happens in the US has a tremendous impact on global standards.

The Right to Report campaign focuses on three areas: the chilling effect of pervasive surveillance; the aggressive campaign to hunt down government leakers, which has ensnared reporters; and the existence of a civil liberties "dead zone" at the US border in which officials are free to search journalists' laptops and other work material. 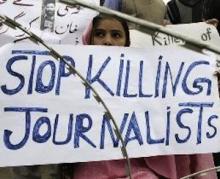 The impact of these policies has been well documented. See for example, the joint Human Rights Watch-American Civil Liberties Union report on surveillance With Liberty to Monitor All. The report, based on extensive interviews and research, described how journalists are changing the way they report because they no longer believe their communication is safe from government snooping. On leak investigation, please see Leonard Downie Jr's comprehensive report for CPJ - The Obama Administration and the Press - in which he describes the insidious "insider threat" program and chronicles the unprecedented number of cases brought under the 1917 Espionage Act. New York Times chief Washington correspondent David Sanger told Downie, "This is the most closed, control freak administration I've ever covered."

This is a characterisation that the White House rejects. "From the day he took office, the president committed his administration to work towards unprecedented openness in government," a White House spokesman told Politico in response to the CPJ report. The administration also points to the revision of the Justice Department guidelines for media subpoenas and the creation of a high-level working group to review media subpoena policies.

But the White House has not broadly engaged on an issue that has emerged as a serious challenge to President Obama's legacy, one that the president can and should address. This is why it is so vitally important that journalists and all others who believe in a free press support the Right to Report campaign and sign the petition. We need journalists who don't generally get involved in these sorts of things to step up. Don't worry, you'll be in good company. Renowned journalists, including CPJ board members Christiane Amanpour and Associated Press Executive Editor Kathleen Carroll, have already signed on.

By helping us stand up for the rights of journalists in the US, you will also help support our global advocacy. We want the US to have an unblemished press freedom record so that it can more effectively advocate for the rights of journalists in countries such as Turkey, Russia, and China. In these places, repression is growing and the stakes are enormous. The US needs to speak out effectively in support of press freedom and it can do so only if its own record is not consistently challenged.

To meet the ideals of the digital age - when information can and should flow freely across borders - the US needs to set the highest possible standards, consistent with the country's First Amendment tradition. In recent years, the US has fallen short. With your help and support, we will work to correct that record.

* Joel Simon is the executive director of the Committee to Protect Journalists. He has written widely on media issues, contributing to Slate, Columbia Journalism Review, The New York Review of Books, World Policy Journal, Asahi Shimbun, and The Times of India.

May 9 deadline for young Black writers cash prize and job