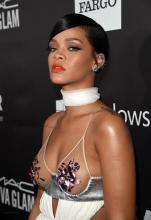 From Rihanna’s liberated nipples to Iggy Azalea’s fake accent to Eminem’s freestyle about punching Lana Del Rey “right in the face”, music has had its fair share of controversial moments in the last year.

Others included, but were not limited to, Solange’s elevator run-in with rapper Jay-Z, Nicki Minaj’s arse, and any time Justin Bieber came into contact with a mode of transport. It seemed that every pop star was embroiled in a controversy that launched a thousand think-pieces, but the one thing they all had in common was that they shouldn’t have been controversial at all.

A controversy used to refer to something that inspired heated public discussion. The kind of issues that should have fallen into this category were things like: do the numerous allegations of sexual assault against US R & B star R. Kelly mean it is no longer acceptable to drop “Ignition (Remix)” in the club? Do the male-dominated line-ups of basically every music festival reflect the patriarchal values of our society or simply a lack of prominent female artists? What’s the ethical implication of hip hop lyrics being used in court as evidence to prosecute people?

But the topic that seemed to engage the greatest level of public discourse was Rihanna’s boobs and what they were up to.

When Rihanna rocked up at Paris Fashion Week last March, all areolas blazing, it was obviously going to be newsworthy. Understandable as it is that Rihanna would make headlines for being the only person to ever look good in a fishnet longsleeve), the fact that her nudity was considered “controversial” made no sense considering the “nip slip” has been systematically documented throughout tabloid history.

Similarly, Lana Del Rey making a tactless remark about wanting to die in an interview with the Guardian, realising that was probably a few steps beyond “on brand”, and then pretending it never happened is about as interesting as the debate about whether her lips are real or not. Here is the absolute extent of Lana’s biggest career “controversy”: she fucked up.

Our preoccupation with the same “scandals” year after year is making pop culture increasingly mundane.

Consider this: the top ten best-selling albums of 2014 were all British, all (bar one) men, and all boring. One of the few “risque” things to happen in British music last year was Fat White Family, and that’s only because one of their videos is literally just an anus travelling across the screen. Their live performances embrace the kind of reckless abandon that disappeared from our cultural fabric the day Pete Doherty evacuated Camden.

I’m not saying that Sam Smith’s minesweeping of every award ceremony was a direct result of our obsession with RiRi’s anatomy, but I would say that both are evidence of pop culture’s general tendency to celebrate the “safe” while approaching anything that might be considered challenging with caution.

Whether it's FKA Twigs owning her sexuality or the singer of Fat White Family thrusting on stage like he’s being molested by a ghost, a “controversial” artist should be doing something progressive, confronting the status quo, or both.

It's used to describe away the things we should be tackling head-on, and the result is that we end up skirting around real criticism and whatever the “controversial” thing was is repeated by someone else a week later.

Take Eminem threatening to punch and rape his female peers, for example. Not only is it the same violently sexist shit he’s been peddling since the 90s with the bitter entitlement of someone who never got over their high school girlfriend, it’s the same violently sexist shit we see happening across the world every single day. If Eminem wanted to do something really controversial, maybe he should have laid down some bars about the gender pay gap or the fact that nearly a third of women in the US have experienced domestic violence. There is no opposing point made by encouraging the tragically common occurrence of violence against women and no “heated discussion” to be had around it; it is barely worthy of attention.

Similarly, Iggy Azalea’s wilful disregard for the culture she is, intentionally or not, using her privilege to capitalise off is nothing but a repeat of behaviour we have seen time and time again. Iggy is a prime example of a pop star who has elevated her career on the back of public debate and exists solely in a bubble of her own criticism. When you strip away the dialogue surrounding her contribution to cultural appropriation and questionable freestyle abilities, there is nothing interesting left to say.

If you think about the pop stars that were accused of “courting controversy" in 2014 (Nicki having a butt, Bieber having an ego, Katy Perry having the absence of a clue etc), each one of them was actually testament to the opposite. They were trite, they were dull, they were exhausted examples of the same institutionalised behavioural patterns and non-scandals rolled out on a production line of tired shit that have haunted us for too long now.

We’re all guilty of spending more time slagging off pop stars for doing things we disagree with than with giving props to those who are trying to do things differently. And that’s fine - there’s a certain level of satisfaction to be gained from tackling the critical shit out of Macklemore’s inexplicable popularity. But incidences of sexism, racism, cultural appropriation, “hyper-sexualisation” et al in music shouldn’t be presented as the great controversies of our time. They should be approached as what they are: stupid attitudes of the old guard that need to die as soon as possible.

In reality, if a pop star wants to be truly controversial, the most “wild” and “out there” thing they could possible do is to actually start confronting some of the cultural embarrassments we’ve all been complaining about since the dawn of the hashtag. Maybe then we’ll get to a place where everyone freaking out over Rihanna’s nipple like a bunch of pre-teens who just discovered Sex and the City takes a backseat.

What 2015 needs are pop stars who are considered controversial because they have disrupted the usual narrative and because they have sparked a conversation that isn’t a variation on one we’ve been having for the last century. I can’t stand to live through another year in which another white middle-class guy with a fade wins all the things purely because nobody can find a bad word to say about him.

Having said that, the first and biggest (or is it smallest?) debate of the year so far concerns the authenticity of Justin Bieber’s bulge, so I’ve not got my hopes up too high just yet.